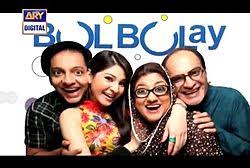 Being a successful sitcom with a high TRP was part of ARY Digital for the past 8 years.

Bulbulay is a family sitcom about an unusual Pakistani family featuring Nabeel, Ayesha Omar, Hina Dilpazeer and Mehmood Aslam holds the record for the longest-running television series of Pakistan. The show gained popularity after the introduction of Hina Dilpazeer, who plays Mumtaz (Momo).

To its credit, it achieved the highest-ever rating of a Pakistani comedy series, with a rating of 8.0 TRPs (Television Rating Points) that is more than any other Pakistani comedy play. Bulbulay, from 2010 to 2012, also won the “Best Sitcom” Award for 3 consecutive years at the Pakistan Media Awards.

Its popularity has crossed the borders and is known in other countries including UK and will be shown in India soon.

But now Pakistan’s favorite sitcom and the most watched comedy television series in the country has just been moved to a new channel. The show was directed by Rana Rizwan, written by Ali Imran and Saba Hassan at ARY Digital  and produced by Nabeel. It is now becoming a part of BOL Network and will be aired regularly on BOL Entertainment.