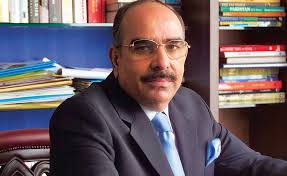 In an MoU-signing ceremony held in the KMC building, Akhtar, on behalf of KMC, and Riaz, representing Bahria Town (Pvt) Ltd, signed the agreement for removal of the backlog of garbage from the city of Karachi. The documents were exchanged and the mayor Karachi gave a shield from the KMC to the chairman of Bahria Town.

Under the agreement, KMC will take the lead role through its mayor to remove the backlog of garbage with the assistance of Bahria Town.

The total generation of garbage in the city is approximately 13,000 tons/per day and the capacity of district municipal corporations to remove the garbage was 40 per cent, resulting in an increase in the daily backlog.

The estimated backlog all over Karachi, both in rural and ubran areas, is around 1,100,000 tons, which would be disposed of with the help of Bahria Town’s staff and machinery.

KMC/DMCs will participate in this campaign through their available expertise and manpower. Both the parties shall coordinate and cooperate with each other to make the living better, it was stated.

The mayor Karachi, while addressing the ceremony on the occasion, said KMC and Bahria Town will begin this drive after Eid-ul-Azha from District Central and other districts would also have similar activity after completion of work in District Central. He said all the district chairmen and elected representatives would also participate in the exercise.

The mayor Karachi thanked the chairman of Bahria Town for his concern about Karachi and said he had been helping the Karachiites through his active financial support in their hour of need.

He said no payment will be made to Bahria Town for its contribution in the removal of garbage backlog from the city and they had agreed to volunteer for this work.

The mayor Karachi said he thought no solid waste management board or rules would be intercepted by this work as they were only doing removal of garbage, which caused immense trouble to the citizens of Karachi. He said this agreement was only for removal of backlog garbage in the city and in order to make the efforts sustainable on long term basis, the provincial government should come up with financial support and administrative measures, for which he offered all sorts of cooperation and guidance.

The Bahria Town chairman in his address said he was asked by former president Asif Ali Zardari to assist the mayor in development of Karachi. He said he was ready to provide any support and cooperation to the mayor Karachi in his endeavours to make Karachi a better city for living. He said if the mayor handed over any hospital or school to them, they would happily manage and run it in a better way or if they asked them to take up the work of any road, they will do this immediately.

Regarding a query about Bagh Ibne Qasim, he said it was only due to some misunderstanding that people said whatever they thought about the issue but the fact was they were not going to take the charge of the park and were only playing their role in making it better. Now, he said, the mayor Karachi was doing this job and they were with him in this connection.