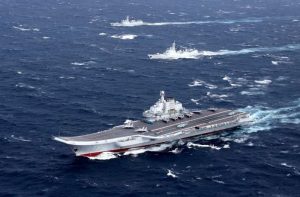 Eleven Chinese warships reportedly sailed into the East Indian Ocean this month, amid a constitutional crisis and state of emergency in the Maldives. Maldives are in debt to China for aid and infrastructure work China and India are in strong competition over the South China Sea Pacific countries now concerned China could make similar power play in region.

A fleet of destroyers and at least one frigate, a 30,000-tonne amphibious transport dock and three support tankers entered the Indian Ocean, news portal Sina.com.cn said, without linking the deployment to the crisis in the Maldives or giving a reason.