Formation of massive cabinet aimed at preparation of elections 2018 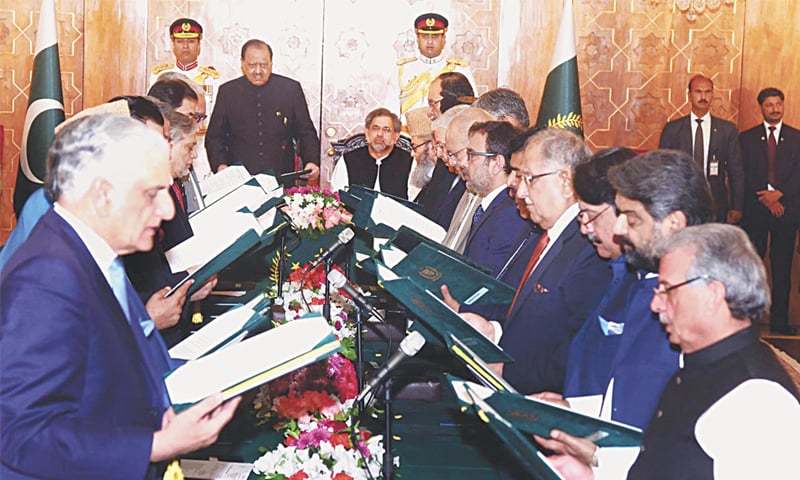 Formation of massive cabinet aimed at preparation of elections 2018

The formation of massive cabinet is aimed at preparation for 2018 general elections and to halt the way of forward block in ruling party, PML-N.

Sources said that basic purpose of formation this massive cabinet is to halt Members’ Parliament of the ruling party from their joining in rival party, Pakistan Tehrik-e-Insaaf(PTI).  Prime Minister Shahid Khaqan Abbasi divided many ministries to allot new portfolios to new ministers.

Shahid Khaqan led cabinet would be comprising on 43 ministers including federal and state ministers while appointment of advisors and special assistants has yet to take place. After this the said number will reach up to a fifty member cabinet.

On the one hand, the government has accommodated its allies by giving more ministries while on the other hand those who were in touch with PTI leaders, have been given ministries to stop them switching.  This step is aimed at preparation of forthcoming general election, which is scheduled to be held in 2018.

Sources said that billions of rupees would be spent on the developmental projects where rivals are strong.  Eight Members from South Punjab have been included in the cabinet to tackle PPP popularity in the Southern Punjab, besides facing PTI.

PML-N chief Nawaz Sharif was aware about those who were in touch with PTI but the decision of their inclusion was taken to keep the party intact. Differences in PML-N have also been exposed after the cabinet took oath. Daniyal Aziz did not take oath despite his presence in Islamabad.  Dosteen Domki and Mumtaz Tarar also did not take oath because they were not happy with the assigned ministries.

Daniyal Aziz wanted portfolio of Federal Minister and was eyeing on ministry of Kashmir Affairs, sources claimed. Nawaz Sharif was not acceded with him.