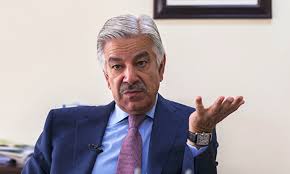 On Monday, the Foreign Minister Khwaja Asif said that a conflict between institutions would be harmful for the country as a whole and not any single institution.

While speaking to a program in regards to the uncertainty about the incident where Interior Affairs Ahsan Iqbal had been barred from entering the accountability court. He added that the reaction of the interior minister was justified.

Asif added that when a institution which comes under the minister acts independently, the minister who is in charge would find it wrong if such treatment was meted out.

The foreign minister added that “an inquiry is underway to clear the matter” he said that he believed the issue was of mismanagement.

Upon being questioned that whether it was right for the interior minister to threaten the concerned authorities of his resignation, Asif said that whoever had been in charge of the accountability court should have been mindful of Iqbal’s position.

The foreign minister implied during the show that the civil-military leadership in the country was on the same page when asked about his recent tweet on fake accounts attempting to create rifts between the government and the armed forces, and the statement Asif made during his recent visit to the United States regarding terrorist elements being present in Pakistan.

The army has been fighting terrorism in the country said Asif, he added that there was no other country in the World which had deployed such a large force in order to fight terrorism.

“In the past four years, each operation of the army has succeeded.”

During Asif’s recent trip to the United States, he had said that Hafiz Saeed, Lashkar-e-Taiba, and the Haqqani network are liabilities for Pakistan.

“You cannot divorce history from the present or the future.”