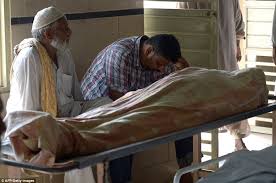 A man committed suicide on Tuesday after allegedly strangling his two daughters in the Darbari area of Bahawalpur’s district, said police.

Police believe that Riaz Ahmed killed his daughters and self following a verbal spat with his wife.

The law enforcement personnel shifted the bodies to a nearby hospital.

Police have started further investigations in to the case.