Mar 12, 2018 NASA Is Inviting People On Their First Mission to Touch the Sun 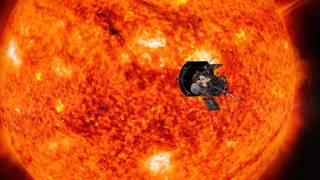 NASA Is Inviting People On Their First Mission to Touch the Sun: Established in 1958, the National Aeronautics and Space Administration NASA, is an independent agency of the executive branch of the US federal government. It works in the aeronautics and aerospace research and is responsible for the civilian space program.

NASA is launching a program in Summer 2018 on NASA’s historic Parker Solar Probe Mission. In 2017, NASA announced a spacecraft from the Solar Probe Plus to the Parker Solar Probe in honor of astrophysicist Eugene Parker. Parker proposed a number of concepts about how stars including our Sun  give off energy in 1950s. The spacecraft will travel directly into the Sun’s atmosphere about 4 million miles from the star’s surface. The mission will travel through the Sun’s air, facing brutal heat and radiation conditions.

Helio-physics is studying how the Sun touches space and the space environment of planets. The field is not only vital to understanding Earth’s most important and life-sustaining star, it backs exploration in the solar system and beyond.

Understanding the Sun has always been a top priority for space scientists. This is a kind of journey NASA has never explored before. NASA administered shared that this mission will give answers to their countless questions they want to have knowledge about since many decades. The primary science goals for the mission are to trace how energy and heat move through the solar corona and to explore what accelerates the solar wind as well as solar energetic particles.

To be part of this program NASA is inviting people around the world to submit their names online to be placed on a microchip aboard.

Submissions will be accepted until April 27, 2018. Learn more and add your name to the mission here: http://go.nasa.gov/HotTicket