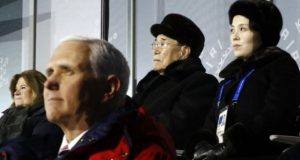 It would have been the first official interaction between North Korea and the Trump administration..State Department spokeswoman Heather Nauert said when the possibility arose of a brief meeting with the North Korean delegation, Mr Pence “was ready to take this opportunity to drive home the necessity of North Korea abandoning its illicit ballistic missile and nuclear programs.