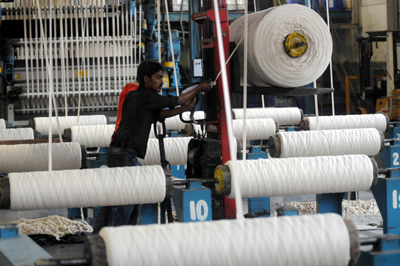 Pakistan Textile Mills Seeks Government Support Claiming That More Than 100 Textile Companies Have Shut Down In Pakistan: Due to stagnant annual growth of cotton yard and cotton cloth production Pakistan Textile Mills is under crucial circumstances. According to the figures provided by Pakistan Bureau of Statistics (PBS) the production data of these two items in FY 2009 growth was 0.

Secretary General of Pakistan Textile Exporters Association (PTEA), Azizullah Goheer, believes the rising cost of production has been a bother for spinning and weaving mills. As per Large Scale Manufacturing (LSM) index, the production of cotton cloth in FY18 is estimated to be 3.42 million tons while cotton yarn output might stand at 1.05 billion square meters which is considered as a zero increase in the production in textile value chain. Various textile mill owners in the spinning and weaving have confirmed these figures.

Energy, in the textile value chain is almost 35% of the total conversion cost but the electricity and gas tariffs being charged from the domestic industry are very high. Chairman of the All Pakistan Textile Mills Association (APTMA), Aamir Fayyaz told to media sources that more than 100 textile companies have shut down completely because of the country’s challenging business environment that also includes about Rs.13 billion of working capital stuck under sales and income tax refunds.

The decline in both cotton production and lower spinning capacity, refer to the fact that growth in the textile sub-index of LSM will gravitate towards zero for the full year FY18. However, taking into account the historical trends, All Pakistan Textile Mills Association (Aptma) has announced that with the help of government they are ready to establish 1,000 garment manufacturing plants with a total investment of $7 billion to resolve the crisis the industry has been embroiled in for years. They have asked government to allow building of infrastructure for garment plants, LTFF (long-term financing facility) to indirect exports and Islamic financing.