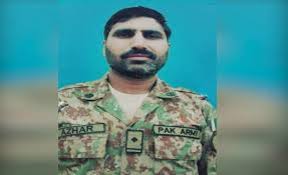 Across the border firing from terrorist across the Afghan border on an Army post resulted in the martyrdom of a Pakistani soldier. A statement by the Inter Services Public Relations (ISPR) said on Tuesday.

The incident had occurred at the recently cleared Mustil pass area, which is an important passage from the Afghan side into Rajgal area of the Khyber Agency.

ISPR has identified the martyred soldier as Naib Subedar Azher Ali, his funeral prayers will be offered at Peshawar Garrison.

On Sunday, the army chief discussed regional security, among other issues, with President Ashraf Ghani during his day-long visit to Kabul.

The Inter-Services Public Relations (ISPR) said both sides reviewed the prevailing security environment in the region and the bilateral relationship between the two countries.

The army chief offered Pakistan’s complete support in achieving shared interests in the war against terrorism, including training and capacity building of the Afghan security forces.

On September 23, a 22-year-old officer of the Pakistan Army, Lieutenant Arsalan Alam, was martyred during firing by terrorists from across the border in Rajgal, Khyber Agency, according to ISPR.

Terrorists fired from across the border on the newly established Pakistani border post in Rajgal, martyring Lieutenant Arsalan Alam, who was commanding the post when he got hit, the ISPR had said.