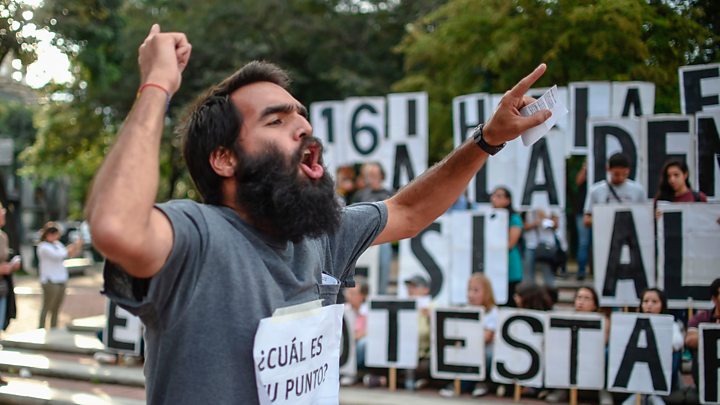 Venezuela’s controversial new assembly has opened despite fierce opposition at home and abroad.

President Nicolás Maduro says the constituent assembly is needed to bring peace after months of crisis.

But the opposition says the new body, which has the ability to rewrite the constitution, is a way for the president to cling to power.

In the capital Caracas, police used tear gas against opposition protesters who tried to reach parliament.

In other parts of the city, thousands of government supporters gathered to cheer and wave flags as the new members took office. Some carried pictures of late leader Hugo Chávez and the independence hero Simón Bolivar.

Among those sitting for the first time in the 545-member assembly are Maduro’s wife and son.

Her opening speech attacked the opposition as “fascist” and warned the international community against interfering.

Despite the protests and despite the criticism both at home and abroad, the Maduro administration has refused to change tack. This constituent assembly was a “victory” for the government, even though most people see it as anything but.

While the political wrangling continues, the economy is being pushed to the brink. When we arrived in Caracas a week ago, the unofficial exchange rate was around 10,000 bolivares to the dollar. It has now nearly doubled to 19,000.

But how much worse can this country get? The feeling is that things could get worse before they get better and that the opposition will need patience.

But the international community might not sit and wait for things to improve. Maduro and several of his friends are already under sanctions. There is a suggestion that the US may broaden sanctions to cover the oil industry but that would be a very unpopular move. With the country relying on oil for more than 95% of its foreign earnings, the fall-out would hurt the people more than the politicians.