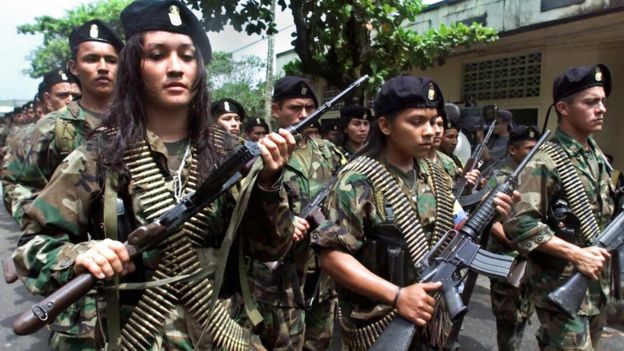 The last batch of weapons belonging to Colombia’s former Farc rebels has been removed under UN supervision.

Speaking at a camp in the north of country where the arms were loaded onto a lorry, President Juan Manuel Santos said this was the “last breath” of the 52-year conflict with the Farc.

The UN mission head Jean Arnault said a total of 17 containers of arms had been handed over over the past year.

About 7,000 troops have demobilised and are to be reintegrated into society.

Mr Santos also said the Colombian state was “committed to the safety of ex-combatants and communities in the zones that endured the armed conflict”.

He said armed forces would be redeployed in areas vacated by the Farc, and the government would provide security, infrastructure, and medical support there.

Under the peace accord reached last November, the Farc will be allowed 10 unelected seats in Congress until 2026 and amnesty will be given to many ex-fighters.

Those former rebels who are convicted in special courts of human rights violations will serve short sentences and perform community services, such as removing landmines.

The peace with the Farc has brought a dramatic drop in violence in many areas of Colombia.

But for the country to achieve total peace, the government will have to either reach agreements with or defeat smaller armed groups still active in the country, our correspondent adds.