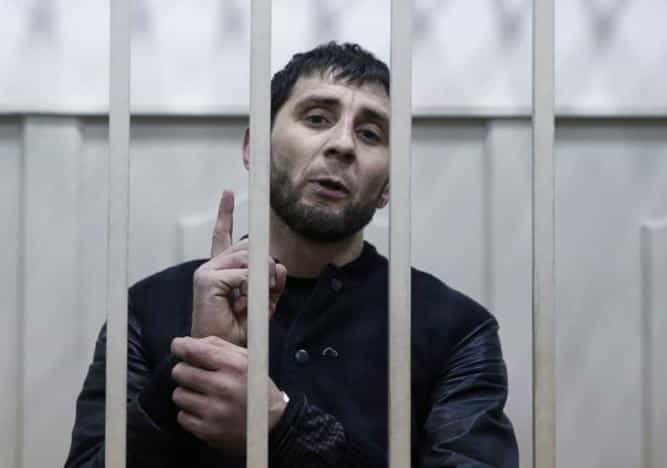 A Chechen gunman and four accomplices have been given long jail sentences for the killing of leading Russian opposition figure Boris Nemtsov near the Kremlin.

Zaur Dadayev was jailed for 20 years by a Moscow military court while the others were given 11 to 19 years.

A vocal critic of President Vladimir Putin, Nemtsov, 55, was shot dead in February 2015. His family fear the person who ordered the murder may never be caught.

They say until then the case will not be solved. Their lawyers believe senior figures within Chechnya who are loyal to the Russian leader may be behind the killing.

The small military courtroom was packed for the verdict, the men themselves in handcuffs inside a glass cage that soon began to steam up from the heat.

Everyone stood as the judge took half an hour to read out his verdict.

The five men were passive at first. Then they smirked and laughed openly as their verdicts were announced.

They had made their final speeches to the court on Wednesday, warning that people would “answer” for imprisoning them unjustly, and proclaiming that only Allah would be

As the guilty verdicts began to come in, one misspelt &quot;A LIE&quot; in the steam in front of him.

Outside in the drizzling rain, lawyers representing Boris Nemtsov’s family pointed out that even the convicted killer was not given a life sentence – he got 20 years. But, most importantly, the person who hired the five to kill has still not been found.

Dadayev is a former member of the elite Northern Battalion in the Northern Caucasus republic of Chechnya, a unit that came under the command of Chechen strongman Ramzan Kadyrov.

The court stripped Dadayev of his rank of lieutenant and removed an earlier award for bravery, Ria Novosti reported. Although he confessed to the killing, Russia’s human rights council said that was likely to have happened under torture.

Two brothers, Anzor and Shadid Gubashev, were jailed for 19 and 16 years respectively. While Dadayev was said to have fired the gun, Anzor Gubashev was accused of driving him to and from the crime scene.

Tamerlan Eskerkhanov was given 14 years and Khamzat Bakhayev 11. They and Shadid Gubashev were convicted of preparing the murder.

Another suspect said to have taken part in the killing, Beslan Shavanov, died as police tried to arrest him.

Boris Nemtsov rose to political prominence in the 1990s as a liberal reformer and deputy prime minister under President Boris Yeltsin.

His political fortunes waned when Vladimir Putin took over the presidency but he became an important opposition force as anti-Putin protests erupted in 2011.

He was openly critical of Russia’s involvement in eastern Ukraine after the annexation of Crimea in 2014.

On the evening he was shot, in February 2015, he had given a radio interview accusing the president of lying over Russia’s military takeover of Crimea and backing a protest march two days later.

As he and his Ukrainian girlfriend crossed the Bolshoi Moskvoretsky bridge before midnight he was shot several times in the back.

Prosecutors said Nemtsov’s killers had been promised 15m roubles ($249,169.44) to carry out the killing.