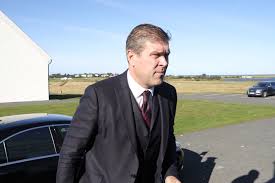 Iceland government collapses over paedophile furore: A furore over a paedophile’s links to PM Bjarni Benediktsson has led to the collapse of Iceland’s ruling coalition.

The Bright Future party said it was leaving the three-party coalition after nine months in office, blaming a “serious breach of trust”.

Mr Benediktsson said the country should hold elections as soon as possible, preferably in November.

Earlier it emerged the PM’s father wrote a letter recommending a convicted paedophile have his “honour restored”.

This old Icelandic system permits convicts to have certain civil rights restored – enabling them to run for public office, qualify for certain government jobs or serve as an attorney or solicitor, for example – if three letters of recommendation from persons of good character are provided.

But Icelanders have been horrified by the secret backing for Hjalti Sigurjón Hauksson – convicted in 2004 of raping his stepdaughter almost every day for 12 years from when she was five. He served a five-and-a-half-year jail term.

The Reykjavik Grapevine news site quotes the survivor of Hauksson’s abuse as saying it was “surreal” that he should receive restored honour.

The government has also been accused of an attempted cover-up after it refused to disclose who had written the letter of recommendation.

It only emerged on Thursday that it was Benedikt Sveinsson, Prime Minister Benediktsson’s father, but the prime minister is said to have been informed about his involvement in July.

In a statement, Mr Sveinsson apologised for providing the recommendation for Hauksson, an old friend of his.

Iceland’s justice minister has said she is preparing a bill to reform the restored honour system in response to the furore.

Later Mr Benediktsson accepted that the government could not continue and that an election would need to be held for the second time in less than a year.

“We have lost the majority and I don’t see anything that indicates we can regain that… I am calling an election,” he told reporters.

Icelandic journalist Hjortur Gudmundsson says the coalition’s position was already fragile, as it had a majority of only one parliamentary seat before Bright Future withdrew its support.

“Since the economic crash of 2008 there has been a lot of suspicion towards politicians and a huge onus on honesty,” Gudmundsson says.

“This is not the first time controversy has been linked to the PM – he was implicated in the Panama Papers [which brought down the previous government, in which he was finance minister]. There isn’t much public patience for this kind of thing.”

In his statement of apology, Mr Sveinsson tried to explain his actions, saying that Hauksson had brought him an already drafted letter which he signed.

“I have never considered the restored honour as anything except a legal procedure making it possible for convicted criminals to regain some civil rights,” Mr Sveinsson said.

“I did not think of it as something that would justify Hjalti’s position towards his victim. I told Hjalti to face his action and to repent.”

“What was supposed to be a small gesture of good will towards a convicted criminal has instead turned into a continuation of the tragedy for the victim. For this I again apologise.”