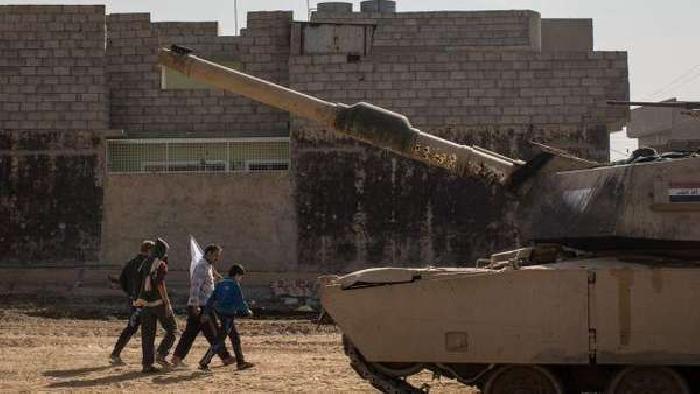 With Iraq s biggest military operation in years set to enter its eighth month in a week, the Islamic State group was only holding on to a handful of neighbourhoods in west Mosul.

Forces from the elite Counter-Terrorism Service “liberated the Northern Industrial Area on the western side,” said the Joint Operations Command coordinating the war against IS in Iraq.

The JOC said the forces “raised the Iraqi flag after inflicting losses to the enemy.”

It added that another, small neighbourhood called 30 Tammuz had also been retaken on Tuesday.

On Monday, Iraqi forces retook full control of Al-Haramat, a large neighbourhood on the edge of the city, according to several senior military officers.

The gains are part of a new push which Iraqi forces launched last week in northwestern Mosul and has already wrested back several neighbourhoods from the jihadists.

The latest operations make it harder than ever to flee for the few hundred IS fighters estimated to remain in Mosul.

The jihadists who have been defending their last major bastion in the country for more than six months have offered limited resistance in recent days, apparently regrouping in the Old City for a last stand.

IS only controls a handful of neighbourhoods around the Old City, where at least 250,000 civilians are still trapped and living in dire conditions, according to aid officials and rights groups.

The narrow streets of the Old City, one of the heritage jewels of Iraq, will make it difficult for federal forces to take on the jihadists, who have had three years to set up their defences.

Elite forces might have to undertake dismounted raids, which could take a heavy human toll on units that have been fighting IS for more than two years uninterrupted.

The presence of a large civilian population, which either chose not to leave or was prevented from doing so by IS, also complicates any final assault to seal victory in Mosul.

Iraqi forces launched a major offensive on October 17 to retake Mosul, which IS seized in June 2014. They secured the eastern side of the city, which is divided by the Tigris river, in January.

The United Nations says 434,000 people fled their homes in west Mosul, since a fresh push was launched there on February 19.

The influx of displaced people is compounding one of the world s biggest humanitarian crises, for which the aid community has warned a funding effort was required.

The UN on Tuesday announced it had opened a new camp east of Mosul as it seeks to provide assistance to the steady flow of displaced who will soon have to cope with Iraq s scorching summer temperatures.

“We still fear more large outflows of people from the west of the city, which is why UNHCR and partners continue to prepare new camps ready to receive those fleeing Mosul, who are desperately in need of assistance,” he said in a statement.

Baghdadi, who made his only public appearance at a mosque in the old city of Mosul in July 2014, has urged his men to fight to the death to defend what was the de facto Iraqi capital of his now crumbling “caliphate”.

IS still holds the towns of Tal Afar and Hawijah, as well as pockets of territory elsewhere in Iraq, including in remote desert areas near the borders with Jordan and Syria.

According to the Iraqi authorities, IS now controls less than seven percent of Iraq, down from more than a third in 2014.