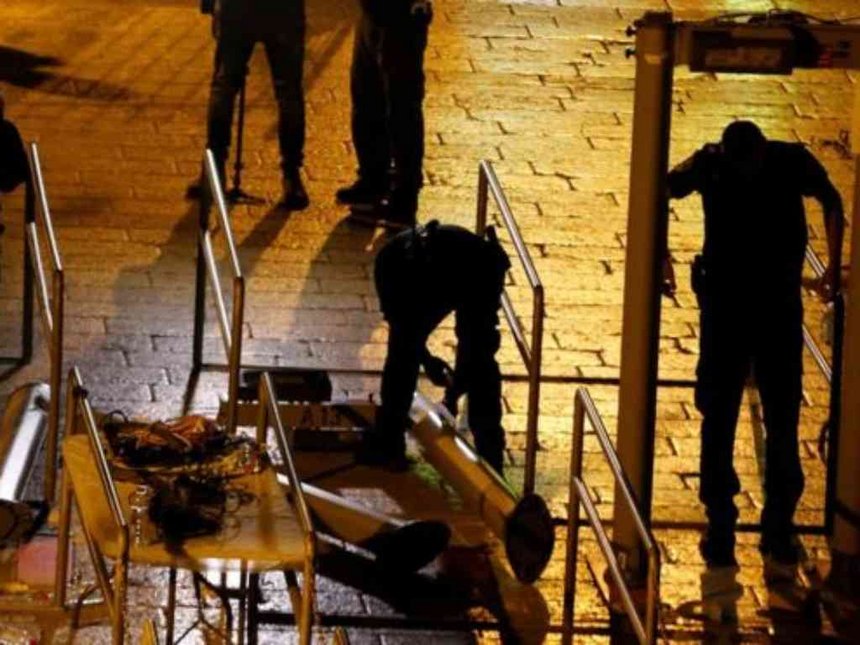 Israel has removed metal detectors from outside a holy site in East Jerusalem after uproar from Palestinians over their recent introduction.

Israel’s security cabinet voted early on Tuesday to remove and replace them with less obtrusive surveillance.

There were deadly clashes after the metal detectors were set up, which Palestinians saw as an Israeli attempt to assert control over the site.

Israel said they were necessary to prevent weapons being smuggled in.

It followed the killing on 14 July of two Israeli policemen by Israeli-Arab gunmen, who police say had hidden their weapons on the hilltop site known to Jews as the Temple Mount and Muslims as Haram al-Sharif.

On Monday the UN’s Middle East envoy warned the tensions risked spreading “well beyond” the ancient city if the issue was not resolved by Friday, when Muslims traditionally go to the site in large numbers for prayers.

A statement from Israeli Prime Minister Benjamin Netanyahu’s office said the security cabinet accepted “the recommendation of all the security bodies to change the inspection with metal detectors to a security inspection based on advanced technologies and other means”.

Some 100m shekels ($28m) has been allocated to pay for new equipment, which will be put in place over the next six months, and extra police officers, the statement said.

The installation of the metal detectors drew angry protests from Palestinians and days of clashes with Israeli security forces, which saw three Palestinians killed in East Jerusalem and the occupied West Bank on Friday.

Later the same day, three Israeli civilians were stabbed to death and a fourth injured by a Palestinian who entered a home at a Jewish settlement in the occupied West Bank.

The site in Jerusalem’s Old City is sacred to both Jews and Muslims. Jews revere it as the location of two Biblical Temples and holiest site in Judaism. It is also the al-Aqsa mosque compound, the third holiest site in Islam.

The area, in East Jerusalem, has been under Israeli occupation since the 1967 Middle East war.

The site is hugely politically sensitive and has been subject to a delicate set of arrangements governing access, security and administration, commonly referred to as the status quo, for the past 50 years.

Palestinians said the placing of the metal detectors upset the status quo, which Israel has repeatedly pledged to maintain.

Many Palestinians have been praying in the streets instead of going through the metal detectors.

A meeting of the UN Security Council was held behind closed doors to discuss the crisis on Monday.

Speaking afterwards, the UN’s Middle East envoy, Nikolay Mladenov, said: “It is extremely important that a solution to the current crisis be found by Friday this week. I think the dangers on the ground will escalate if we go through another cycle of Friday prayer without a resolution to this current crisis.”

He continued: “Nobody should be mistaken that these events are localised events. In fact, they may be taking place over a couple of hundred square metres, but they affect millions if not billions of people around the world.