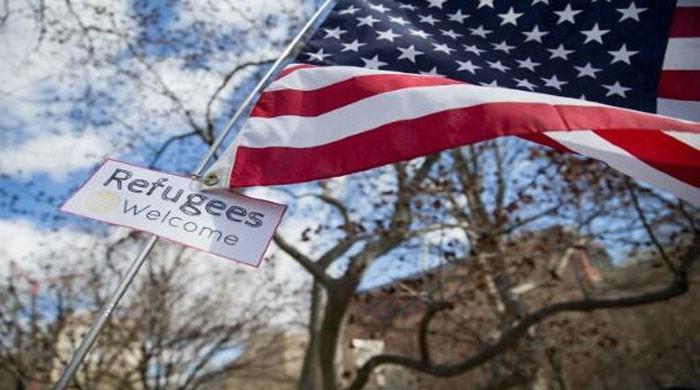 President Donald Trump faces a day of legal reckoning Wednesday on the fate of his revised travel ban, with three federal courts from Maryland to Hawaii to mull over the measure on the eve of its implementation.
Several states along with refugee assistance programs and rights groups have brought suits over the Republican leader´s executive order — a revamped version of the order he issued on January 27, which was suspended by the federal courts.
The new measure — set to take effect Thursday — bars all refugees from entering the US for 120 days and halts the granting of new visas for travellers from six mostly-Muslim nations: Iran, Libya, Somalia, Sudan, Syria and Yemen for 90 days.
Iraq was dropped from the list in the second order, which also explicitly exempts legal permanent residents and valid visa holders.
The first challenge will be heard in Maryland at 1330 GMT. The second will come before a judge in Hawaii at 1930 GMT and the third, in the same Seattle court that barred the first measure, will begin at 2100 GMT.
The White House reworked the first executive order to address some of the issues that came up in court, but the main points are largely the same.
Trump and his top cabinet members — Secretary of State Rex Tillerson, Attorney General Jeff Sessions and Homeland Security Secretary John Kelly — say the travel ban is necessary to keep extremists from entering the United States.
But critics say the new order is still essentially a ban on Muslims coming to the United States, and therefore unconstitutional because it singles out people of a certain religion for discrimination.
The first version of the order triggered howls of protest at home and abroad as well as chaos at US airports as people were detained upon arrival and either held for hours or sent back to where they came from.
Since September 11, 2001, the worst attacks in the United States have been committed either by radicalised Americans or by people from countries not on the Trump travel ban list.
Critics also argue that it will have a very negative effect on schools and universities and the business world, mainly the high-tech sector, which employs many highly skilled immigrants.
Coast to coast:
The new battle against Trump´s order is being played out on several geographical fronts, but mainly on the west coast, which tends to be pro-Democrat.
The state of Washington, joined by five other states, filed a complaint Monday with the same Seattle judge who stayed Trump´s original travel ban back in February.
Trump responded by insulting the federal magistrate, James Robart, calling him a “so-called judge.”
Hawaii has also filed its own, separate complaint against the order.
And several rights and refugee advocacy groups, including the American Civil Liberties Union, have filed papers with a judge in Maryland.
Under the US legal system, a federal judge can suspend all or part of the Trump executive order, with nationwide effect — which Robart did the first time around and which the state plaintiffs hope he will do again.
Justice Department lawyers are ready to do battle to defend the new Trump order in court.
In Hawaii, the government filed a motion opposing the state´s request for an injunction, saying the travel ban is “a valid exercise of the president´s broad statutory authority to ´suspend the entry of any aliens or of any class of aliens.´”
The new order hit its first roadblock Friday when a judge in Wisconsin said it could not be applied to the wife and child of a Syrian refugee who had already reached America.