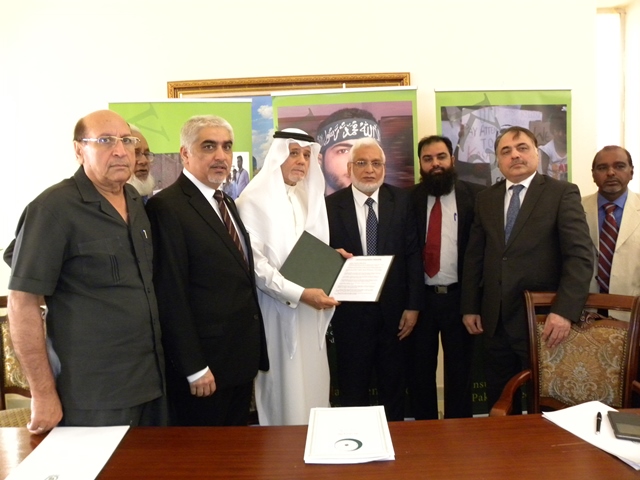 ISLAMABAD: The Kashmir Committee, mark Kashmir Black Day in Saudi Arabia and expressed solidarity with Kashmiri people in their just struggle for their right to self-determination.
The committee unanimously adopted a resolution which condemned ongoing atrocious human rights violations in the Indian Occupied Kashmir.The resolution called upon India to immediately stop gross, systematic and state sponsored human rights violations in Kashmir and allow international human rights and humanitarian organizations an unhindered access to the occupied state.
The committee also condemned the unprovoked firing by the Indian forces on the Line of Control (LoC) with intentional targeting of civilian areas. The committee stressed that the core dispute between Pakistan and India and current catastrophic situation in Indian Occupied Kashmir is the result of non-resolution of the Jammu and Kashmir dispute.
The committee urged India to implement UN Security Council resolutions on Kashmir which declare that the final disposition of the State of Jammu and Kashmir will be made in accordance with the will of the people. The committee called upon the international community to fulfill its obligations by persuading India to implement the UN Security Council resolutions on Kashmir.
The resolution commended Pakistan for its unconditional political, moral and diplomatic support for the Kashmiri struggle and denounced continued Indian occupation of the state of Jammu and Kashmir. The committee appreciated the efforts of the Government of Pakistan to highlight the atrocities of Indian Security forces in Indian Occupied Kashmir at the international fora including United Nations.
The resolution expressed gratitude to the Kingdom of Saudi Arabia as well as the Organization of Islamic Cooperation for their consistent support to the Kashmiri struggle. The committee thanked the Consul General of Pakistan for its continuous support to the Kashmir cause.