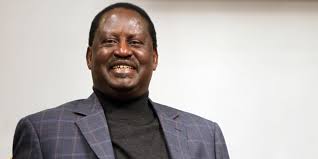 Kenya opposition presidential candidate Raila Odinga has said the electoral commission’s IT system has been hacked to manipulate the election results.

The electoral commission has not yet responded to Odinga’s accusation, but politicians have called for calm.

Many fear a repeat of the violence after a disputed election 10 years ago.

These results mean Kenyatta appears to be heading for a first-round victory.

In order to avoid a run-off, a candidate needs 50% plus one of the votes cast and at least a 25% share of the vote in 24 of Kenya’s 47 counties. There were eight candidates in all, but apart from Kenyatta and Odinga, none polled more than 0.3% of the vote.

Speaking at a press conference Odinga, who heads the National Super Alliance (Nasa), said his supporters should remain calm.

But in the opposition stronghold of Kisumu, in western Kenya, a group of several hundred of his supporters took to the streets shouting: “No Raila, no peace”.

They were then dispersed by police using tear gas.

Odinga said that the hackers had gained access to the Independent Electoral and Boundaries Commission (IEBC) computer system by using the identity of the commission’s IT manager, Chris Msando, who was killed last month.

He alleged that the hackers “loaded an algorithm” that allowed them to alter the results and ignore the figures being transmitted from tallying centres around the country.

The opposition leader had earlier told journalists the results coming in were “fake”, because the authorities had failed to present documents verifying the results.

The electoral commission has not reacted to the claims that its IT systems had been hacked, but earlier it urged people to wait calmly for the full results of Tuesday’s vote.

“During this critical phase, we urge all Kenyans to exercise restraint as we await official results from the polling stations and indeed as they start trickling in,” the commission said.

However, it admitted that a lack of mobile data coverage had delayed the delivery of the supporting documents, which had formed the basis for the opposition’s earlier complaint.

There had been reports on election day of the failure of some voter-identification equipment.

Also, one in four polling stations were without strong mobile phone coverage, meaning that officials were asked to drive to the nearest town to send results.

The presidential candidates’ agents would have “special access” to the forms, though, the electoral commission said.

The Daily Nation newspaper quoted commission head Ezra Chiloba as saying only results supported by the forms had been published.