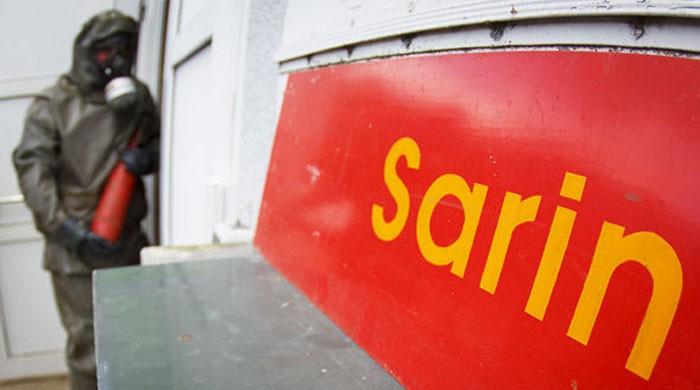 Key facts about sarin – lethal nerve gas that kills in minutes: HumSub.TV: The United States believes the Syrian government employed a sarin-like nerve agent in Tuesday´s deadly attack in the country´s northwest. Here are the key facts about sarin, which was discovered in Nazi Germany.

Originally conceived as a pesticide, sarin was used by Iraqi dictator Saddam Hussein´s regime to gas thousands of Kurds in the northern town of Halabja in 1988.

Inhaled or absorbed through the skin, the gas kills by crippling the respiratory center of the central nervous system and paralyzing the muscles around the lungs.

The combination results in death by suffocation, and sarin can contaminate food or water supplies, according to the US Centers for Disease Control and Prevention (CDC).

Images from the rebel-held town of Khan Sheikhun showing victims suffering convulsions, breathing problems and foaming at the mouth have shocked the world. Initial analysis on victims brought to Turkey for treatment suggests they were exposed to sarin.

Symptoms of exposure to the agent include nausea and violent headaches, blurred vision, drooling, muscle convulsions, respiratory arrest and loss of consciousness, the CDC says.

“Sarin is 26 times more deadly than cyanide gas. Just a pinprick-sized droplet will kill a human,” according to the World Health Organization.

Inhalation of a high dose — say 200 milligrams of sarin — may cause death “within a couple of minutes,” with no time even for symptoms to develop, according to the Organization for the Prohibition of Chemical Weapons.

Exposure through the skin takes longer to kill and the first symptoms may not occur for half an hour, followed by a quick progression.

Even when it does not kill, sarin´s effects can cause permanent harm — damaging a victim´s lungs, eyes and central nervous system.

Heavier than air, the gas can linger in an area for up to six hours, depending on weather conditions.

The most notorious sarin attack occurred in the Kurdish city of Halabja in March 1988.

As many as 5,000 people were killed and 65,000 injured when the Iraqi military attacked using a combination of chemical agents that included sarin, mustard gas and possibly VX, a nerve agent 10 times more powerful than sarin.

It is thought to have been the worst-ever gas attack targeting civilians.

A cult also used the odorless, paralyzing agent in two attacks in Japan in the 1990s.

The Aum Supreme Truth cult released it in the Tokyo subway in March 1995, killing 13 people and injuring 6,000 others. The cult also used the nerve agent in an attack the year before in the Japanese city of Matsumoto, killing seven.

The name sarin comes from the chemists who discovered it by chance: Schrader, Ambros, Ruediger et Van der Linde. The scientists had been trying to create stronger pesticides but the formula was then taken up by the Nazi military for chemical weapons.