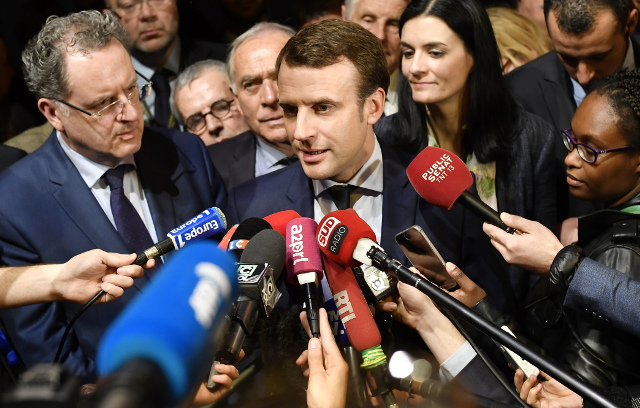 Pro-Europe centrist Macron, 39, was elected on Sunday after promising a ‘revolution’ that would bring fresh faces into France’s stale political landscape and end the pattern of power alternating between traditional parties. His newly renamed grassroots movement, La Republique en Marche [Republic on the Move], founded only 13 months ago, revealed 428 out of 577 candidates for the parliamentary polls.

“We aim to build a majority for change and to win an absolute majority in parliament,” party secretary general Richard Ferrand told a news conference. Macron had promised that half would be newcomers, meaning a diverse range of figures from business, public service, activist groups and academia will get a chance to seek elected office. “The promise of renewal is fulfilled,” Ferrand said, adding that the average age of the candidates was 46 – compared with 60 in the current national assembly.

On the tricky position of whether to accept former Socialist prime minister Manuel Valls, Ferrand said the party had not selected him, but would not field a rival against him in his south of Paris seat.

Valls, a friend-turned-foe of Macron’s from their time in government from 2014-2016, had asked to be selected on Tuesday, but said he welcomed news that Macron’s movement would not oppose him. “So it will be as a free man, yet with a strong political identity … republican, progressive, of the left, that I act,” said the former premier, urging people “who want the new president of the republic to succeed” to vote for him.

Other successful bids came from a woman fighter pilot who will run in eastern France and a man born in Rwanda who was adopted in France at the age of four and will contest a seat in Brittany.

The nomination process is a balancing act for Macron and represents major risks for his presidency, which will begin formally on Sunday when he takes over from Socialist Francois Hollande. Without his own parliamentary majority, Macron will find it hard to push through his planned reforms of the labour market, pensions, unemployment benefits or education.

Many of his newcomers will also face seasoned politicians with long careers and local networks of activists and supporters. And there is also the risk of scandal if anyone with a chequered history slips through the vetting process of the more than 19,000 applications sent online since January.

Ferrand said each candidate had been interviewed and had declared not to have a criminal record or to have been disqualified for any function in the past. “Our movement has done everything possible to make sure that the candidates chosen respect our values,” he added.

The president-elect is a left-leaning liberal and was a senior adviser to Hollande before being named economy minister during the latter’s unpopular term. But from the list are 214 candidates who are already politicians, including familiar faces from the Socialist Party and from the centrist MoDem party, headed by Macron ally Francois Bayrou.

There are none, however, from the rightwing Republicans party, according to its secretary general Bernard Accoyer, but Ferrand left the door ajar for some of them to join in the next week. Some 148 constituencies – not including Valls’ area – remain open.

Macron, a former investment banker who has never held elected office, faces other tricky decisions this week. The biggest among them is his choice for prime minister, who will head the government until at least the parliamentary elections on June 11 and 18 and perhaps beyond.

The choice will send a strong signal about Macron’s intentions, and he has promised to pick someone with past experience of parliament and capable of managing a majority. His declared preference is for a woman.

Amid feverish speculation in the French media – will he pick a loyal supporter or someone from the rightwing Republicans? – nothing has leaked from his small group of aides. The political consequences of Macron’s victory are still being felt, with the Socialists fighting for relevance and the Republicans eager to become the main political force in parliament after the June elections.