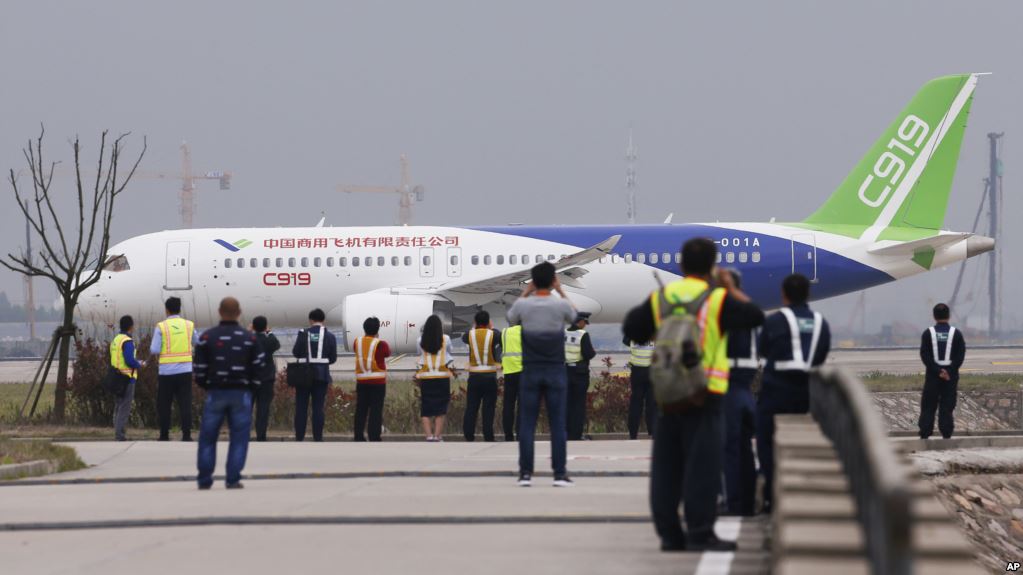 The narrow-body C919 jet — white with green and blue stripes — soared over Pudong international airport in the commercial hub Shanghai as a crowd of thousands cheered.

Built by state-owned aerospace manufacturer Commercial Aircraft Corporation of China (COMAC), the plane represents nearly a decade of effort in a government-mandated drive to reduce dependence on European consortium Airbus and US aerospace giant Boeing.

The flight is the latest sign of China’s growing ambition and technical skill, coming one week after the country launched its first domestically made aircraft carrier and docked a cargo spacecraft with an orbiting space lab.

The plane took off at 2:00 pm (0600 GMT) and was expected to fly for an hour and a half as ministers, COMAC staff, company partners and others looked on.

China has dreamt of building its own civil aircraft since the 1970s, when it began work on the narrow-body Y-10, which was eventually deemed unviable and never entered service.

President Xi Jinping himself has endorsed the new project, visiting COMAC even before he took office in 2013. The first flight was supposed to take place last year, but it was delayed until now.

His call to arms is emblazoned on the wall of the jet’s production facility: “Accelerate the construction of the world’s top aviation company and continue to make new contributions to develop a strong aviation industry.”

China is a massive battleground for Boeing and Airbus, with the country’s travel market expected to surpass the United States by 2024, according to the International Air Transport Association.

Airbus and Boeing estimate that Chinese airlines will need between 6,000-6,800 aircraft at a total price of around $1 trillion.

The twin-engine C919, whose name sounds like the Chinese word for “everlasting”, can seat 168 passengers in an arrangement similar to other narrow-body jets: three white-velvet upholstered seats line each side of its central aisle.

The C919 will need to pass more tests to obtain Chinese airworthiness certification. The Shanghai-based company is also aiming to have the plane certified by US and European regulators.

COMAC’s smaller, 90-seat ARJ21 plane, which entered service in 2016, several years late, is currently restricted to flying domestic routes as it still lacks the Federal Aviation Administration (FAA) certification that would allow it to fly US skies.

Another challenge for the C919 is earning consumers’ trust, said Shukor Yusof, an analyst with Malaysia-based aviation consultancy Endau Analytics.

“It will take some time for customers around the world to be comfortable buying Chinese airplanes,” he said, adding, “it’s not going to happen in the next ten years.”

“It’s going to be incredibly tough not because it’s not a good product. But because you need to get comfort and credibility to the product among potential clients, potential customers.”