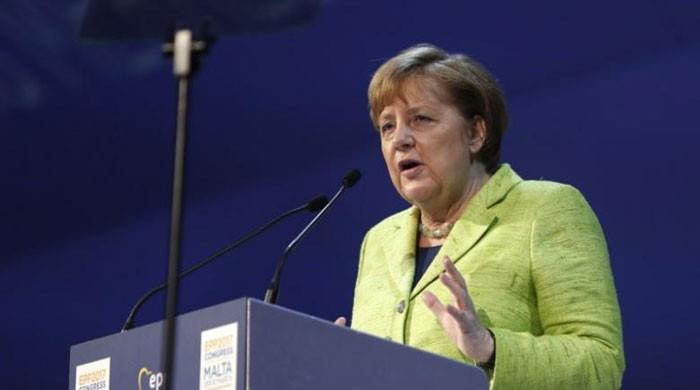 Merkel says migrants must respect tolerance, German laws: HumSub.TV: Chancellor Angela Merkel said refugees in Germany must respect tolerance, openness and freedom of religion, while senior members of her party called for a ban on foreign funding of mosques.
Merkel, who will seek a fourth term as chancellor in what is expected to be a tight election in September, has come under fire for allowing more than one million refugees to enter Germany over the past two years.
Interviewed by a Syrian journalist who came to Germany in 2015 and asked about what Germany was expecting from refugees, Merkel said in her weekly podcast:
“We expect the people who come to us to stick to our laws.”
Merkel said it was paramount that new arrivals respected and understood the liberal values of modern Germany such as tolerance, openness, freedom of religion and freedom of opinion.
The center-right leader urged Germans to show openness in return. “We know very few things about Syria, we know very few things about Iraq or African countries. And we must see this as an opportunity to learn more and experience more,” she said.
Merkel’s conservative Christian Democratic Union (CDU) party has lost support since her decision in 2015 to leave Germany’s borders open for hundreds of thousands refugees fleeing the civil war in Syria and Iraq.
Immigration and security are set to be major issues in the election, in which the far-right, anti-immigrant Alternative for Germany (AfD) party is expected to enter parliament.
In an apparent attempt to address unease among traditional CDU voters over Merkel’s migration policy, CDU deputy party leader Julia Kloeckner called for stricter rules for Islamic preachers and a ban on foreign funding of mosques, echoing comments by other senior CDU members in recent days.
Most of the four million Muslims living in Germany have a Turkish background and some mosques in Germany are financed by the Turkish government.
“An ‘Islam law’ can place the rights and duties of Muslims living in Germany on a new legal basis,” Kloeckner told Bild am Sonntag.
Kloeckner also called for a public register that would list all mosques in Germany and provide background information on sponsors and financiers.
Such rules should also include a right to a Muslim religious counselor in prisons, hospitals and nursing homes, she added.
The CDU’s coalition partner and rival party the SPD, whose new leader Martin Schulz will stand against Merkel in September’s election, flatly rejected the idea.
“In my opinion, the proposals are hardly compatible with the German constitution,” SPD deputy leader Olaf Scholz told the Funke media group, adding that a law could not only be made for a single religious community.
The chairman of the Islamic Council in Germany, Burhan Kesici, said the proposals were populist and put Muslims under blanket suspicion.