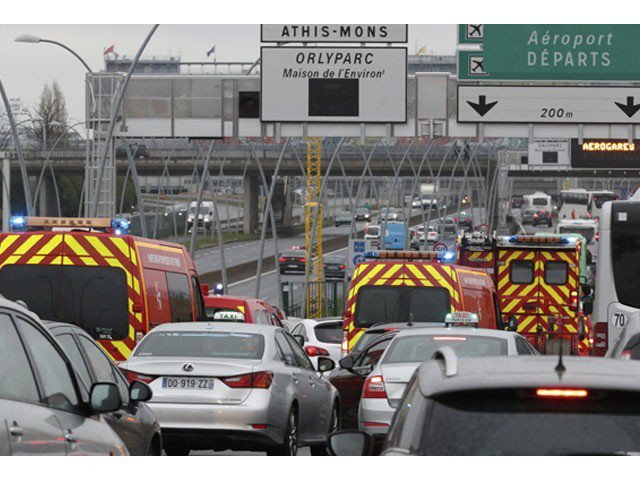 The man who was shot dead by soldiers at Orly airport on Saturday was the same individual who had shot at security services earlier in the morning in northern Paris and was a radicalised Muslim known to authorities, a police source said.

“A police road check took place in Stains (northern Paris) this morning at 0700. It turned bad and the individual shot at the officers before fleeing,” one police source said.

“This same man – a radicalised Muslim known to intelligence services and the justice system – then took a Famas (assault weapon) from a soldier at Orly’s southern terminal … before being shot dead by a soldier.”

A second police source said the two incidents were linked.

Security forces at Paris’ Orly airport on Saturday shot dead a man who took a weapon from a soldier, the interior ministry said, adding that nobody was hurt in the incident.

“A man took a weapon from a soldier then hid in a shop in the airport before being shot dead by security forces,” an interior ministry spokesman told AFP.

Explosion at a nuclear plant in France

He said no one was wounded in the incident.

Interior Minister Bruno Le Roux is due to visit the facility, which is in Paris’ southern outskirts, the spokesman added.

“We had queued up to check in for the Tel Aviv flight when we heard three or four shots nearby,” witness Franck Lecam said.

“The whole airport has been evacuated,” the 54-year-old said, confirming what an airport worker, speaking on condition of anonymity, had said earlier.

“We are all outside the airport, about 200 metres from the entrance,” Lecam said.

“There are policemen, emergency workers and soldiers everywhere in all directions. A security official told us that it happened near gates 37-38 where Turkish Airlines flights were scheduled.”

The soldier from whom the man took the weapon was a part of Operation Sentinelle, deployed after the January 2015 Paris attacks.

It involves some 7,000 troops of whom roughly half are deployed in the Paris region. They are charged with guarding religious sites which could be targets of terror attacks as well as airports, railway stations and tourist spots.

A notice was posted on the Paris airports authority website urging passengers not to travel to Orly.

Budget airlines easyJet said in a statement that “like all other airlines” it expected interruptions and flight delays, adding that 46 of its flights were due to fly in and out of the airport on Saturday.

On Thursday, a letter bomb exploded at the Paris offices of the International Monetary Fund, injuring a secretary who suffered burns to her hands and face.

French President Francois Hollande called it an “attack”, saying it showed the country was “still targeted”.

“All this leads me to justify the state of emergency” that has been in effect since November 2015, Hollande said.

The Paris letter bomb coincided with a school shooting in the southern town of Grasse that left around 10 people injured and rattled nerves.