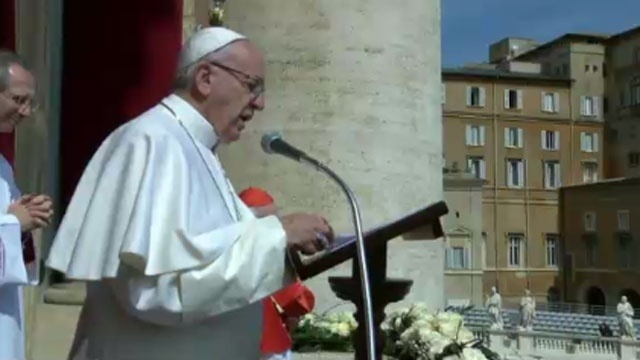 Up to a million people are expected to attend the canonization mass on Saturday at the shrine for the children, who the Vatican believes received messages from the Madonna that have become known as the three secrets of Fatima.

“For this blessed moment that culminates a century of blessed moments, I rejoice in your preparations of intense prayer,” the pope said in a message to the Portuguese people ahead of his two-day visit.

Fatima is a town in central Portugal where the apparitions were recorded.

“I think it has a very big importance for the whole world,” said Vanessa, a worshipper who had made the pilgrimage to the shrine from the Philippines.

She called the canonization “historic” in recognizing the impact of Fatima.

For Portugal, one of Europe’s most Catholic countries with 81 percent of the population describing themselves as belonging to the faith, the event is a big deal and the story of Fatima is universally known.

“Welcome Pope Francis,” read a huge poster with images of the pope and the shepherd children hung up on Lisbon’s main traffic intersection.

Father Vitor Coutinho, deputy head of the sanctuary of Fatima, said the pope was showing the importance of Fatima to the church by carrying out the canonization there rather than in Rome, where they are usually done.

“Therefore he is confirming that a life lived in the light of the spirituality of Fatima can lead to sainthood,” Coutinho said.

The story of the shepherd children, Francisco and Jacinta Marto, has captivated Catholics ever since their first reported vision on May 13, 1917. Their first vision was of hell and a call to prayer and conversion, which if not heeded would lead to another world war.

The second was a warning that Russia would “spread her errors” in the world if people did not turn to God.

The third secret intrigued the world for nearly three-quarters of a century, inspiring books and cults.

Only in 2000 did the Vatican say the third secret was a prediction of the 1981 assassination attempt on Pope John Paul II, who survived and subsequently gave the bullet that hit him to the bishop of Fatima.

It was later put into the crown of the statue of Fatima and many Portuguese say the bullet was a perfect fit, providing evidence of the vision.

The Catholic Church posthumously confers sainthood on people considered so holy during their lives that they are now believed to be with God and can intercede with him to perform miracles.

Francisco and Jacinta’s miracle is linked to the inexplicable healing from a terrible head injury of a Brazilian child, whose parents prayed to the siblings.

The child’s parents are due to make a statement to the press at Fatima on Thursday.

Francisco died in 1919 and Jacinta died a year later, both of pneumonia, when they were still just 9 and 10-years-old. The third sibling, Lucia, became a nun and died in 2005 at 97.

Portugal has taken a series of security measures for the pope’s visit, including by reinstating border controls for a few days by suspending the Schengen Europe-wide free travel agreement.

In the large, open space around Fatima special cement blocks have been put in place to avoid the possibility of militant attacks such as those in Stockholm and Nice.