Putin Elected As Russian President For The 4th Time: HumSub.TV

May 9, 2018 Putin Elected As Russian President For The 4th Time 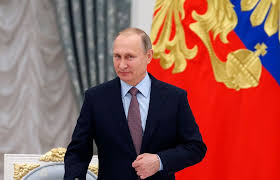 Putin Elected As Russian President For The 4th Time

Putin Elected As Russian President For The 4th Time: Vladimir Putin has been elected for a fourth term as Russian president. It was announced at a lavish ceremony in an ornate Kremlin hall with 5,000 guests. He has been in power for 18 years, as president and prime minister, and opponents have likened his tenure to the reign of a tsar, emperor.

Putin on the ceremony has pledged to harness Russian talents to “achieve breakthroughs”. Celebrity friend of Mr Putin, Hollywood star and Russian citizen Steven Seagal, stood near the President in front row during the ceremony. Putin said that past Russia has recovered from all setbacks of cold war.

“We need breakthroughs in all areas of life. I’m deeply convinced that such a leap forward can only be secured with a free society that accepts all that is new and advanced.” He said.

However protests were also observed in Russia on the selection of Putin as president for the fourth time. More than 1,000 people were arrested in 19 cities. They were complaining that Mr. Putin had failed to reduce the wealth gap, did not refund Russians who lost savings during market reforms and had failed to raise wages, pensions and benefits.

Mr. Putin’s most praiseworthy achievement was restoring Russia’s world status as a great power as per his voters.

Mr. Putin was re-elected president with more than 76% of the vote, but widespread irregularities were reported by some international observers. Allegations of ballot-rigging had dogged previous elections too.

First elected president in 2000, Mr Putin renewed his four-year term in 2004 before stepping aside in 2008 to serve as prime minister under his protege, Dmitry Medvedev, because by law he could serve only two consecutive terms.

In 2012 Mr Putin returned as president, this time for a term of six years. When he reaches the end of his fourth term in 2024, he will have been in power for nearly a quarter of a century.