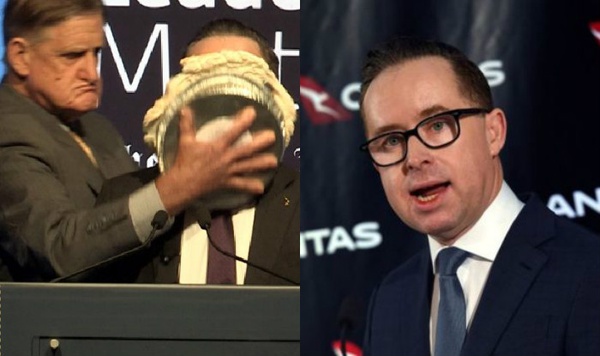 Qantas chief hit with pie over gay marriage support: Qantas chief Alan Joyce Wednesday vowed to keep speaking out on social issues after a man who smashed a pie in his face said he was making a statement about marriage equality.

Joyce, a staunch supporter of gay marriage, was targeted on Tuesday while addressing a business function in Perth, with a man wearing a suit walking on stage and smothering the lemon meringue pie over him.

He was named by the Australian Broadcasting Corporation as 67-year-old former farmer Tony Overheu, who is opposed to marriage equality.

Police said he had so far only been charged with providing false details.

“Alan Joyce is a very active individual in this process (towards marriage equality) and in that context he was appropriate (to target),” Overheu told the broadcaster.

“I’ve never done that sort of thing, I’m a law-abiding person, but I think this is part of inevitable pushback.

“When the community is grumpy, figures who are overstepping the line have got to anticipate there will be pushback in some shape or form. The broad community have had a gutful.”

In March, Joyce was one of 20 chief executives of some of Australia’s largest companies to sign a joint letter in support of marriage equality.

He said in a statement Wednesday the incident would not stop him speaking out.

“I’ve long held the view that there is a role for companies and CEOs to speak up on economic and social issues. My opinion on this has not changed,” he said.

“We’ll continue to speak about important social issues including indigenous reconciliation, gender diversity and marriage equality, because it’s the right thing to do.”

Despite strong popular support for marriage equality, Australia is seen as lagging behind nations that allow homosexual couples the right to wed.

Same-sex couples can have civil unions or register their relationships in most states across Australia, but the government does not consider them married under national law.