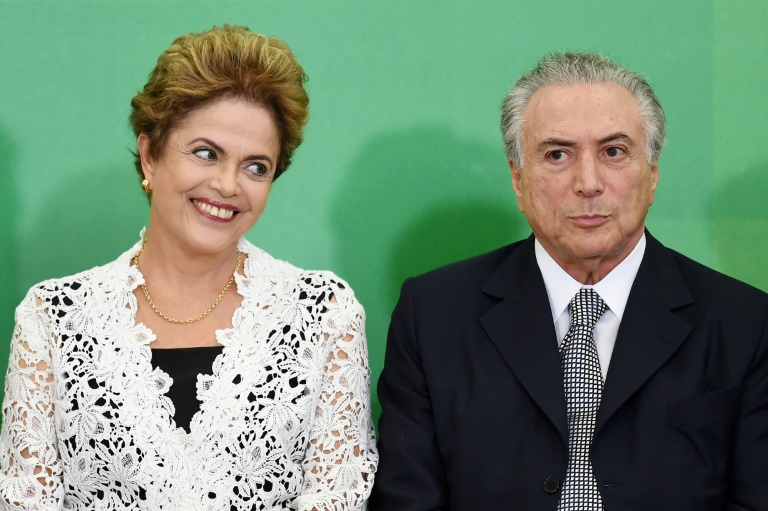 Temer’s Brazil presidency hits year mark in turmoil: President Michel Temer said Friday that he’d put Brazil back on track after one year in power since the traumatic impeachment of his predecessor Dilma Rousseff.

An accidental president, Temer moved up from the vice presidency 12 months ago when Rousseff was suspended — and later formally removed — for using illegal accounting maneuvers to mask the financial problems afflicting the government.

His main promise was to pacify a country roiled by its worst recession in history and a deep divide between Rousseff’s leftist base and his own conservative wing.

At a ceremony in Brasilia, Temer said mission accomplished.

“We are finishing our first year of government with complete conviction that we are on the right path,” he said.

Alongside him, Finance Minister Henrique Meirelles declared: “Brazil is changing more in one year than it did in decades.”

The region’s most powerful economy has begun to inch out of recession. However, unemployment remains at a record high, with more than 13 million out of work, while the left-right divide is as bitter as ever.

Opinion polls say eight out of 10 Brazilians are disappointed with Temer, while barely one in 10 approve of his performance.

An often aloof figure who built his career as a political insider rather than retail politician, Temer professes not to care about his unpopularity. He says his emergency mandate, which runs out after elections in October 2018, is dedicated to making the hard decisions needed to fix Brazil’s economy.

He is getting results in a conservative-dominated Congress that had previously fought Rousseff tooth and nail before almost gleefully stripping her of her office during last year’s impeachment.

The first big reforms have been a 20-year government spending cap and labor law changes that make it easier to hire and fire workers in order to stimulate economic activity.

But the centerpiece is pension reform, which Temer argues is necessary to prevent the generous current system from sinking Brazil’s deficit-burdened budget.

The proposal, which would make people work longer, has prompted strong opposition. It has come in a range of forms, from invasions of Congress by disgruntled prison guard union members to a general strike last month that ended with violent confrontations in the streets of Rio de Janeiro and Sao Paulo.

Otavio Guimaraes, history professor at the University of Brasilia, says Temer is having a hard time selling reforms when many think of him as a mere placeholder.

“He got into power through the back door and proposed radical changes to the Brazilian state without having the popular vote,” he said.

All Temer’s attempts to move on from the Rousseff era are being overshadowed by a huge corruption scandal centered on embezzlement from Petrobras, the state oil company.

Among the scores of senior politicians caught up in the “Car Wash” investigation are eight of Temer’s own ministers. Just last month, almost a third of the Senate and 40 lower house deputies were targeted for probes.

Temer himself faces accusations of involvement in the scheme, but has immunity for alleged crimes predating his presidency and is not being investigated.

Further muddying the waters is the drama surrounding the former leftist president Luiz Inacio Lula da Silva, who led Brazil for two terms before stepping aside for his protege Rousseff.

A hate figure to many on the right, Lula faces no fewer than five corruption trials.

However, he is currently leading opinion polls for the 2018 election. Some think that only the “Car Wash” prosecutors can stop him: if he is convicted and loses an appeal, he would be barred from running for office.

Despite Brazil’s entrenched problems, the mixed results of the last year balance out as positive, says David Fleischer, professor emeritus at the University of Brasilia.

“I think the impeachment was good for the country,” he said, “because it is pushing back the recession and putting the country on a more stable path.”