Terrorism had taken roots of culture and tolerance in the country: Maryam 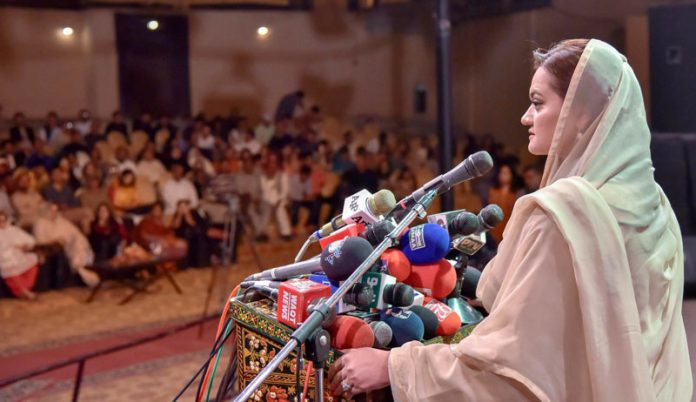 Islamabad (HumSub) Minister of state for Information, Broadcasting and National Heritage Ms. Marriyum Aurangzeb has said that the implementation of the anti-terrorism policies through the efforts of the government, cooperation of the provincial governments, sacrifices of the armed forces and the law enforcing agencies and the people of Pakistan, have started paying dividends. She said that due to terrorism in the last 30-40 years a culture of intolerance had also taken roots in the country. The minister was speaking at 200thanniversary of  Bahaullah organized by Lok Virsa here today. The MOS said that due to the vision of the former Prime Minister the country wasagain emerging as a cradle of peace and  the people belonging  to all religions andfraternities were living in the country with pride and celebrating their festivals unhindered.The minister said that Pakistan was fighting a war of perception and passing through a verydifficult phase therefore all of us had to fight this war collectively as a nation and emergetriumphant. She said that we would have to correct our behaviours and do our duties inindividual capacities without raising fingers towards others. She said malice, hatred andjealousies could destroy any society. Marriyum said that national identity could be presentedbefore the global community in a better way through heritage, culture, music, films andliterature. She said that sixty per cent of our population consisted of youth who were thefuture architects of the nation and needed to be guided towards the right direction byeliminating the culture of intolerance.She said she was immensely pleased to participate in the 200th anniversary ofBahullah who during his entire life disseminated knowledge and taught good behavior to thepeople. Marriyum said that Bahaullah believed that all the religions were leaves of the sametree and if the tree came to any harm all the leaves would be affected. The minister saidthat the country was witnessing a revival of arts, literature, culture and heritage and theplaying fields were regaining their lost hustle and bustle. She informed the audience that onthe completion of 70 years of independence special ceremonies had been initiate addingthat ministry of Information and its attached departments including PTV and Radio and LokVirsa were ensuring the outreach of these programems to all the corners of the country,which would continue till December. She said that Lok Virsa was striving hard to groom the talent of the youth. ExecutiveDirector of Lok Virsa Dr. Fauzia Saeed said that the entire nation shared the festivities withthe Bahai community.  Secretary General of Bahai Movement said that Baha Ullah was bornin the royal family of Iran in 817 who gave the message that one should seek happiness byjoining the happiness of others. He said that all the people belonging to Baha Movementwere grateful to the MOS for her participation in the anniversary and highlighting the imageof Pakistan. The artists from all the provinces, Gilgit Baltistan and AJK and Hunza enthralledthe audience with folk songs of their respective regions.