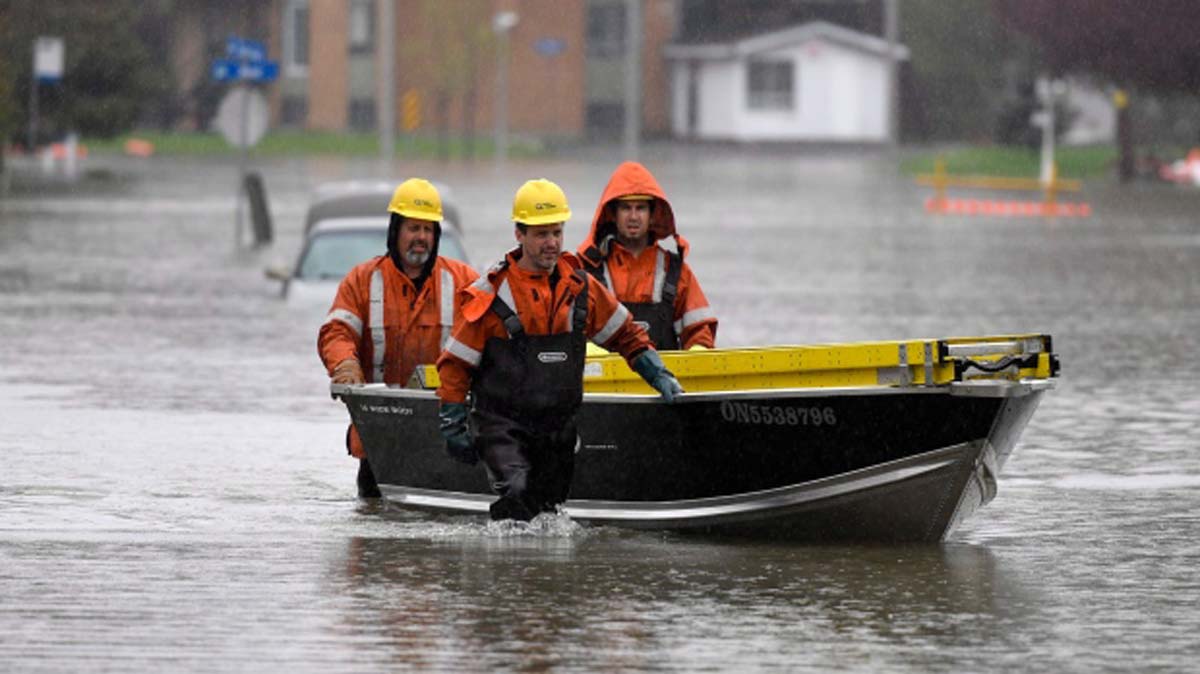 Torrential rains combined with runoff from melting snow have caused rivers to overflow their banks, posing a critical situation from Ottawa to Montreal.

The worst is yet to come, Quebec Premier Philippe Couillard warned on Saturday. “The water will continue rising over the next two or three days,” he said after visiting the town of Rigaud, east of Montreal, which has been flooded for more than a week.

Water levels continued to rise across an area of some 500 kilo meters, from Toronto and Lake Ontario and stretching downstream along the St Lawrence River. The flooding was especially bad in Quebec province, where some 400 troops have been dispatched.

“Our troops are responding quickly and professionally and are already beginning to deliver critical support to Canadians affected by the flooding,” Defense Minister Harjit Sajjan said.

Emergency services warned that rising waters would reach regions east of Montreal, where precipitation by Sunday night could reach between 90 and 125 millimeters.

“The ground, already near saturation, has little ability to absorb further rainfall,” Environment Canada said in a weather alert for the region. “Even shallow, fast-moving water across a road can sweep a vehicle or a person away. Don’t approach washouts near rivers, creeks and culverts. Consider moving valuable items to higher levels.”

Near the Atlantic, the New Brunswick Emergency Measures Organisation warned residents to remain on alert until Monday, saying water levels are near or above flood stage in many regions and expected to rise.

In Quebec, the province hardest hit by the flooding, more than 1,500 homes have been flooded in 121 towns and cities and nearly 1,000 people evacuated, the emergency services said. “I understand people are reluctant to leave their homes,” Couillard said, “but if you’re asked, do it for your own safety.”

Meanwhile, in British Columbia on the opposite side of the country, the same combination of rain and snow melt had caused flooding and mudslides that left at least two people missing, media reports said. Residents of several dozen homes were ordered to move to safety.

The Royal Canadian Mounted Police were searching for Clayton Cassidy, 59, the fire chief of the village of Cache Creek who went missing on Friday as he was checking creek water levels. The search included swift water technicians and dog teams, Corporal Dan Moskaluk said in a news release.

A 76-year-old man was missing after a mudslide swept away his home in the community of Tappen early Saturday, CBC reported. First responders rushed to the scene but were forced to pull back. “It sounded like a freight train coming down the mountain… We heard trees snapping and it got louder and louder, so we got out of there,” Tappen Sunnybrae Fire Department Chief Kyle Schneider told the broadcaster.