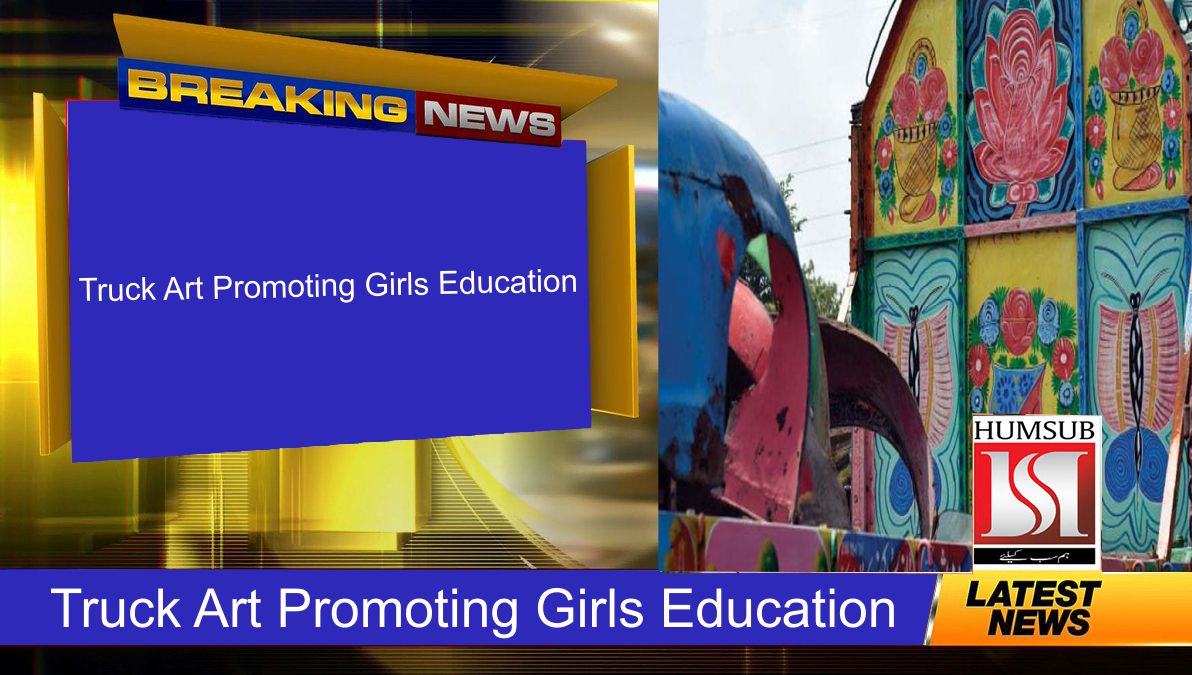 Truck Art Promoting Girls Education:Painting a colourful portrait of a young girl with books in her arms and a message advocating female education, truck artist Hayat Khan says he now finds satisfaction in his work.

A truck artist for 35 years, Khan has spent a lifetime painting vibrant but meaningless portraits of actors and animals. He says he feels responsible and proud painting portraits of young girl students.

The truck he was painting has the image of a young girl in a school uniform with a school bag and books. The background is of a village with mud houses and a pond.

The truck owner, Abdul Manan, was also pleased with the painting. He drives his truck deep into Punjab and believes the message will reach a myriad of people and will inspire other truck drivers to get similar portraits as well.

“A daughter is a blessing, not a burden and she has all the rights which a son enjoys. I saw a truck on a route from Lahore to Multan which had this message and I wanted to get it on my truck as well,” he said.

Hayat Khan has done similar work in Kohistan district under a Unesco project for girls’ right to education as the literacy rate for girls in that district is the lowest in Pakistan.

Renowned documentary maker and activist Samar Minallah assigned Hayat Khan to paint portraits of school-going girls on trucks with the message, Education is Power and Education is Light in Urdu.

Mr Khan’s son, Tahir Hayat, has also joined his father in the project. “Truck painting is our family business but it did not interest me. However, I have been assisting my father in the project and I believe all Pakistanis should play a role in this drive, whenever they get a chance,” Tahir said.

He added that they have received orders from Mansehra, Kohistan, Sukkur, Multan and other remote areas after the completion of their first project initiated by Ms Minallah and Unesco. Recently, for the first time in Punjab, under the Asian Development Project, Legal Literacy for Women in Punjab, Samar Minallah reached out to truck owners and artists to convince them to paint messages on the right of inheritance for women and rights of the girl child.

As many as 20 trucks will be painted with various portraits and messages. The portraits will show men as heroes and partners which will help local truck owners and men own the idea. This is based on the premise that there are men who believe in the rights of women and it is important to highlight this silent majority.

One of the messages asks men, “My father will give me my rightful share of inheritance. Will you?” Yet another image shows a father encouraging his daughter to read.