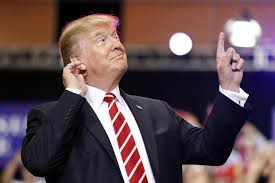 On Tuesday President Donald Trump expressed satisfaction with the response by the federal government to Hurricane Maria’s devastation of Puerto Rico, despite the criticism that the government had been slow to address the crisis.

Trump, who has grappled with hurricanes Harvey, Irma and Maria in the past six weeks, said at a briefing that the disasters were straining the U.S. budget.

“I hate to tell you, Puerto Rico, but you’ve thrown our budget a little out of whack because we’ve spent a lot of money on Puerto Rico,” he said. “And that’s fine. We’ve saved a lot of lives.”

Two weeks after it was hit by the worst hurricane in 90 years, many of Puerto Rico’s 3.4 million residents are still struggling without basic necessities. Shortly after Trump left Puerto Rico, Governor Ricardo Rosello said the death toll had risen from 16 to 34.

The U.S. territory’s economy already was in recession before Hurricane Maria and its government had filed for bankruptcy in the face of a $72 billion debt load. In an interview with Fox News, Trump said the island’s debt would have to be erased.

“They owe a lot of money to your friends on Wall Street and we’re going to have to wipe that out. You’re going to say goodbye to that, I don’t know if it’s Goldman Sachs but whoever it is you can wave goodbye to that,” Trump said in the interview, conducted while he visited the island.

Moody’s on Tuesday estimated Maria’s total cost to Puerto Rico, including lost output, at $45 billion to $95 billion and significant relief from the federal government would be required.

Trump said the federal response to Maria compared favorably with a “real catastrophe like Katrina,” the 2005 storm that swamped Louisiana and Mississippi and killed more than 1,800.

“What’s happened in terms of recovery, in terms of saving lives – 16 lives that’s a lot – but if you compare that to the thousands of people who died in other hurricanes that frankly were not nearly as severe,” he said.