May 8, 2017 humsub.tv, ISIS, U.S.-backed militias say they made new advance against Islamic State in Tabqa, USA 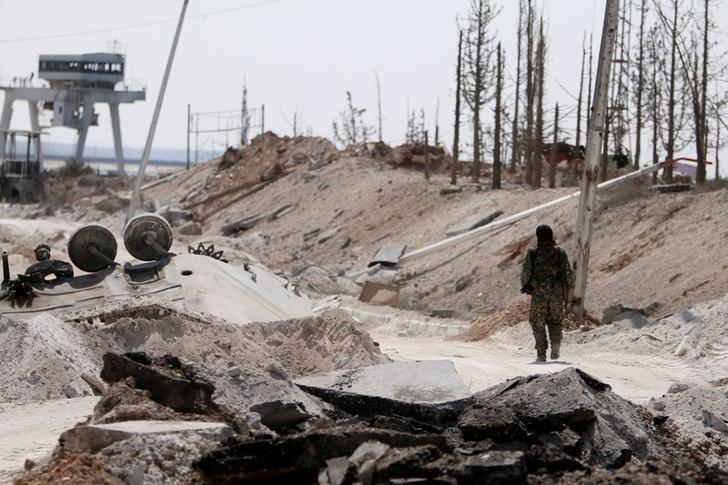 U.S.-backed militias say they made new advance against Islamic State in Tabqa: A group of Kurdish and Arab militias supported by the United States captured a district of the town of Tabqa from Islamic State on Monday, they said in a statement, a step towards the capture of Syria’s largest dam.

The Syrian Democratic Forces (SDF) has been fighting Islamic State in Tabqa for weeks, aiming to capture not just the town but its Euphrates dam, a vital strategic objective before assaulting the jihadists’ regional stronghold of Raqqa.

“The forces of Wrath of the Euphrates managed to liberate the First Quarter of the town of Tabqa this morning, which divides the three new quarters of the town from the Euphrates dam, after intense fighting,” it said.

Wrath of the Euphrates is the name used by the SDF and the U.S.-led coalition against Islamic State for its campaign to drive the jihadist group from Raqqa, a major city that it has used to control its northern Syria territories and plot attacks abroad.

The SDF assault on Tabqa began after U.S.-forces helped its fighters conduct an airborne and water crossing of the Euphrates in late March.

According to a map the SDF distributed on its Wrath of the Euphrates social networking feed, its new advance has brought it very close to the southern edge of the dam, where a hydro-electric plant and associated operations buildings are sited.

The SDF already controls the northern bank of the Euphrates and northern stretches of the 4 km (2.5 mile)-long dam.