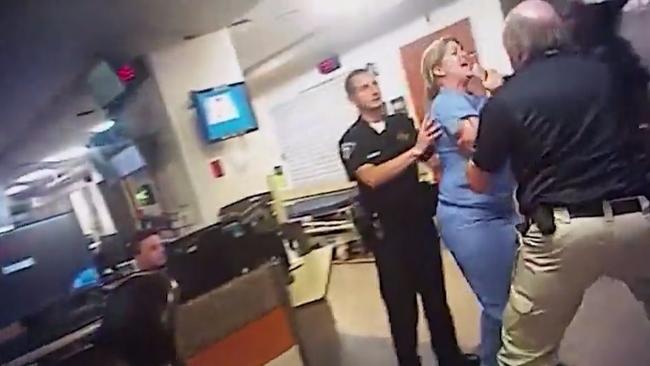 Two US police officers who forcibly arrested a nurse who refused to draw blood from an unconscious patient violated police codes of conduct, a report says.

An internal affairs investigation into the actions of the Salt Lake City officers is considering possible misconduct relating to lawful arrests and the police code of ethics.

The incident, involving nurse Alex Wubbels, was recorded on a body camera.

The hospital said she acted correctly.

Dashcam footage showed Detective Jeff Payne dragging and handcuffing Ms Wubbels after she said his request for a blood sample was against policy.

Ms Wubbels screamed “I’ve done nothing wrong!” as she was dragged away.

Mr Payne was heard saying he would retaliate against the hospital when he said: “I’ll bring them all the transients and take good patients elsewhere.”

Salt Lake City Mayor Jackie Biskupski said the footage of Ms Wubbels’ arrest, which was captured on 26 July but emerged some weeks later, was “unacceptable”.

“This incident is not reflective of who we are as a city or as a police department,” Ms Biskupski said on Wednesday.

Sharing the findings of the investigation, Ms Biskupski said that a number of policy violations against the officers were being considered.

She said that the violations stipulated in the report included “conduct unbecoming by a police employee” and “policy regarding arrests”.

Mr Payne and his deputy James Tracy, who have been placed on administrative leave, have up to 20 days to respond to the allegations.

Ms Biskupski said that Wednesday’s announcement was “not the final step” in the investigative process.

The findings of the report, she said, would be sent to Salt Lake City police chief Mike Brown to make a decision on whether any further action should be taken.

The police department said that its policy in relation to requesting blood samples in such circumstances had since been amended to match that of the hospital.

University of Utah Hospital policy stipulates that blood can only be handed over without a patient’s consent if they are under arrest or the police have a warrant – neither of which was the case in the incident in July, the hospital said.

Ms Wubbels later said in a statement that the city’s mayor and police chief had both apologised over the treatment she had received, and that she had accepted their apologies.