70 Years of WHO Promoting Health For All: HumSub.TV 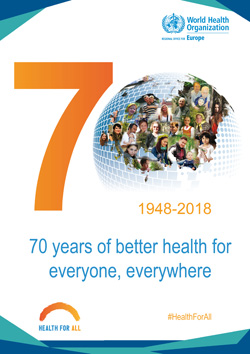 70 Years of WHO Promoting Health For All

70 Years of WHO Promoting Health For All: At the agency’s annual conference in Geneva, World Health Organization (WHO) director-general, Tedros Adhanom Ghebreyesus, vowed to use his position to keep the world safe and to serve the vulnerable by promoting health for all.

The overflow audience at the Assembly enthusiastically marked the World Health Organization’s 70th Birthday. WHO Chief Tedros Adhanom Ghebreyesus agreed there was much to celebrate.

In the Democratic Republic of Congo health workers are risking their lives to stop the Ebola outbreak in that country.

This is only the latest of 50 emergencies in 47 countries and territories to which WHO has responded in the past year.

It is why WHO has established an initiative on climate change and health in small island developing states and is working on an aggressive new initiative to jumpstart progress against malaria, an entirely treatable disease that still kills half a million people every single year.

WHO has rolled out an ambitious new five-year strategic plan, which aims to make a big impact on health. Tedros said the goal is to achieve the highest attainable standard of health for all peoples in the world, poor and rich alike.

Prior to the start of the World Health Assembly, delegations from the countries of the Americas met with the Director of the Pan American Health Organization, Carissa F. Etienne, to review the agenda items.