Climate Genocide Is Coming Warned UN: Just two years ago, amid global fanfare, the Paris climate accords were signed — initiating what seemed, for a brief moment, like the beginning of a planet-saving movement. But almost immediately, the international goal it established of limiting global warming to two degrees Celsius began to seem, to many of the world’s most vulnerable, dramatically inadequate; the Marshall Islands’ representative gave it a blunter name, calling two degrees of warming “genocide.”

The alarming new report this week from the UN’s Intergovernmental Panel on Climate Change — which examines just how much better 1.5 degrees of warming would be than 2 — echoes the charge. “Amplifies” may be the better term.

Hundreds of millions of lives are at stake, the report declares, should the world warm more than 1.5 degrees Celsius, which it will do as soon as 2040, if current trends continue.

Nearly all coral reefs would die out, wildfires and heat waves would sweep across the planet annually, and the interplay between drought and flooding and temperature would mean that the world’s food supply would become dramatically less secure.

Avoiding that scale of suffering, the report says, requires such a thorough transformation of the world’s economy, agriculture, and culture that “there is no documented historical precedent.” The New York Times declared that the report showed a “strong risk” of climate crisis in the coming decades; in Grist, Eric Holthaus wrote that “civilization is at stake.”

If you are alarmed by those sentences, you should be — they are horrifying. But it is, actually, worse than that — considerably worse. That is because the new report’s worst-case scenario is, actually, a best case. In fact, it is a beyond-best-case scenario. What has been called a genocidal level of warming is already our inevitable future. The question is how much worse than that it will get.

Barring the arrival of dramatic new carbon-sucking technologies, which are so far from scalability at present that they are best described as fantasies of industrial absolution, it will not be possible to keep warming below two degrees Celsius — the level the new report describes as a climate catastrophe.

As a planet, we are coursing along a trajectory that brings us north of four degrees by the end of the century. The IPCC is right that two degrees marks a world of climate catastrophe. Four degrees is twice as bad as that. And that is where we are headed, at present — a climate hell twice as hellish as the one the IPCC says, rightly, we must avoid at all costs. 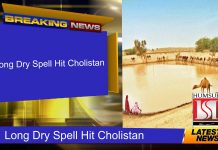