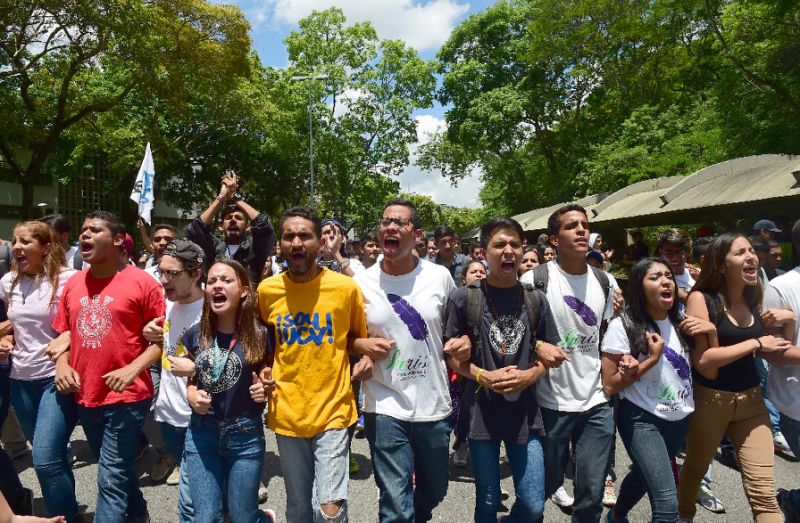 Deadly unrest grips Venezuela as students rally: A student leader was shot dead as protests raged on in the streets of Venezuela Thursday in the latest spasm of anger aimed at removing President Nicolas Maduro from power.

Crowds of students clashed with riot police firing tear gas in the mounting crisis in this oil-rich country saddled with shortages of food, medicine and other basics.

The leftist Maduro’s opponents accuse him of trying to strengthen his grip on power and delay elections by launching legal proceedings to overhaul the constitution.

The latest toll provided by prosecutors on Thursday said 35 people have been killed in just over a month of protests against Maduro, whose opponents blame him for Venezuela’s dire economic mess.

News of the latest deaths — up from a toll of 33 earlier Thursday — came as organizers announced a women’s march for Saturday.

Protesters at the women’s rally, to take place in downtown Caracas, were urged to wear white, a traditional show of defiance against what organizers have branded a repressive government.

The student leader killed Thursday was at a meeting in the northern state of Anzoategui when “one of those present approached him and shot him several times before fleeing on a motorbike,” the prosecutor’s office said in a statement.

It did not say whether the killing was directly linked to the protests. But it came amid high tension as students pushed on with a wave of street rallies.

Crowds of them marched in Caracas, some clashing with riot police who blocked their way and fired tear gas.

The prosecutors said a policeman died from a gunshot wound during a protest Wednesday in the western city of Carabobo.

In the northern industrial city of Valencia, protesters looted stores, set fire to cars and clashed with police Thursday night. At least five people were injured, one of them seriously, news reports said.

The reports said people in Valencia had begun hoarding basic foodstuffs and barricading housing developments to keep looters out.

The opposition wants a vote on removing Maduro from office. His term ends in early 2019.

The president, elected in 2013, says the crisis is a US-backed capitalist conspiracy.

The opposition and government have accused each other of fomenting violence.

“I don’t know how long the protests are going to last,” senior opposition leader Henrique Capriles told AFP in an interview.

“If we were being violent, if we were not being democratic, we would already have toppled the government.”

In his latest crisis maneuver, Maduro on Wednesday launched procedures at the electoral council to elect a “constituent assembly” to draft a new constitution.

“This is the path of peace and reconciliation for Venezuela,” he said on television on Thursday.

“It is a complex battle, but no one will take our homeland from us.”

Private polls indicate that more than 70 percent of those interviewed do not support Maduro.

He said the constitutional reform body would not include political parties with seats in the opposition-controlled National Assembly, but representatives of social groups traditionally loyal to him.

Maduro’s center-right opponents and some international powers said the move is an attempt to dodge local elections this year and a presidential poll set for late 2018.

“Since the government cannot win elections, it wants to dismantle the system for holding them,” Capriles told AFP.

Attorney General Luisa Ortega broke ranks with the government over the political crisis.

She told the Wall Street Journal that the government should ensure people’s right to demonstrate freely, without arbitrary arrests.

“We can’t demand peaceful and legal behavior from citizens if the state takes decisions not in accordance with the law,” the Journal quoted her as saying on Wednesday.

The current unrest has come close to matching that of 2014, when clashes killed 43 people.

Despite the country’s chaos, Maduro retains the military’s public backing — one thing that analysts say could yet tip the balance against him.

“What happens if the National Guard (military police) says they are not going to continue the repression?” Capriles said.

“Will Maduro’s position be sustainable?”