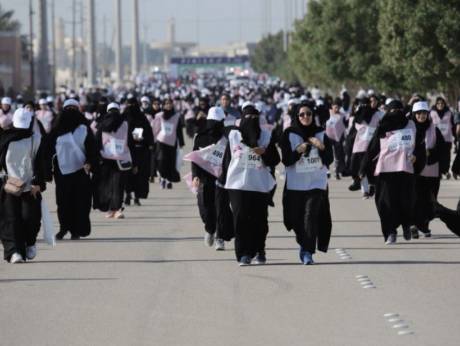 First Women’s Marathon In Saudi Arabia: 1,500 women participated in the first-ever 3-kilometer marathon in Saudi Arabia, which took place in eastern Al-Ahsa region over the Weekend while over 2,000 wome signed up for the race according to Arab Media. Most of the participants were dressed in traditional Islamic attire.

“Al-Ahsa Runs” was the title of the marathon, in which women from different walks of life including professionals, amateurs, old and young citizens of Saudi Arabia enthusiastically participated. Women from other countries also participated in the first ever marathon in Saudi Arabia. This Marathon was sponsored by the Saudi General Directorate of Sports, Al-Moosa Hospital and Al-Ahsa Municipality.

The winner of the First Women’s Marathon in Saudi Arabia, Mizna Al Nassar, a 28 year old engineer told in the interview that she had full support of her family and she experienced no problems or issues during her participation in the competition. She made it to the finish line in 15 minutes by beating contestants from the US and Taiwan who came second and third in the ‘Al Ahsa Runs’ competition in Al Ahsa, Eastern Saudi Arabia. Mizna is now looking forward to represent her country at the 2020 Olympic Games in Tokyo. She has actively participated at the Islamic Solidarity Games and the Arab Games.

The aim of this marathon was to promote running and introduce the concept of sports for a healthier way of life. The event came after Riyadh hosted its first international half-marathon in late February, which irked complaints from some Saudis on social media about the notable absence of women.

Saudi media sources have stated that Sports authorities are set to organize another marathon for women in the holy city of Mecca on April 6. It will stage more than 5,000 festivals and concerts in 2018, double the number of last year, and pump $64 billion in the sector over the coming decade, the Kingdom’s General Entertainment Authority said.

Previously in September 2017, hundreds of women were allowed to enter a sports stadium in Riyadh for the first time to mark Saudi Arabia’s national day. In January 2018, sports matches were officially opened up to women spectators.

It is important to note here that the Saudi Kingdom has in recent months reduced restrictions on women, including the lifting of a driving ban which will go into effect from June 2018. Now Saudi officials are encouraging women to participate in fitness and sports activities.