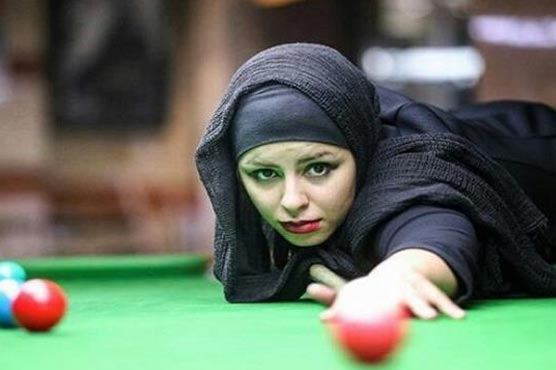 The Disciplinary Committee of Bowling, Billiard and Boxing Federation did not reveal the nature of the alleged offences, saying it would name the transgressors later.

“Women sent to China Open (billiard) competitions will be banned from all domestic and foreign competitions for one year for violating the Islamic code,” it said late Thursday, according to the ISNA and Tasnim news agencies.

The category of billiard sports includes billiards, pool and snooker.

The reported ban comes less than two months after the Iranian chess federation announced possible disciplinary action against an Iranian brother and sister for violating Islamic and political rules.

Dorsa Derakhshani, who holds the title of International Master, has been living in Spain for more than two years, and playing without the hijab headscarf in chess games.

She could face a ban from the federation, fines, prison or lashes if she returns to Iran.

Her teenage brother Borna was threatened with disciplinary action for competing against an opponent from Iran’s arch-foe Israel, which is forbidden by Tehran.

Since the 1979 revolution, Iran has required women to wear the Islamic headscarf in public.

T-shirts and jeans are banned for women attending billiard sport competitions, according to the website of the Iranian federation, which could not immediately be reached for comment.

However, over the years, however, women have pushed back the boundaries of the law, with many wearing loose, brightly coloured headscarves far back on their heads.

In October, Akram Mohammadi became the first Iranian woman ever to win a medal in a major billiard competition, taking bronze at the Asian championships in the United Arab Emirates.

She told the state-run Iran Online website after her victory that the World Pool-Billiard Association had not tried to restrict the wearing of headscarves at international competitions, unlike some other sports.