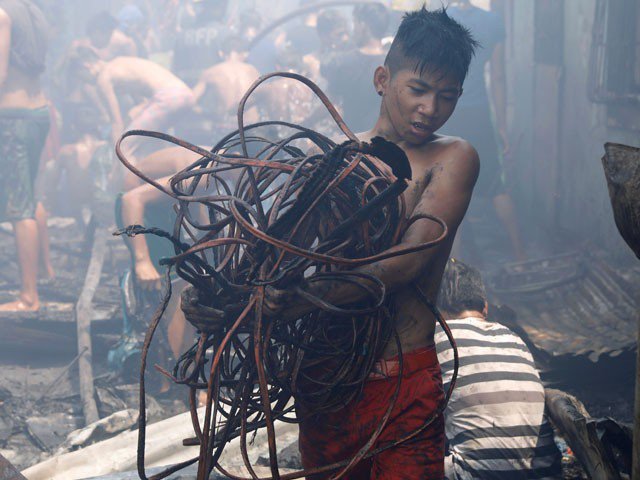 Riot police surrounded the White Rock Island shantytown at Manila’s port area after being summoned by firemen who struggled to reach burning homes accessible only through narrow alleys that were swarmed by residents as well as scavengers.

An AFP photographer saw about 100 people, most of them men, engaged in tug of wars over electricity cables that had been pulled from still burning shanties.

They also fought over metal roofing sheets that were bent out of shape by the intense flame, which they hauled off using improvised wooden carts.

“These are informal settlers trying to make a buck out of salvaged materials,” Aljeph Lorenzo, one of dozens of firemen who responded to the fire alarm told AFP.

“This happens all the time whenever a slum is struck by fire. They interfere with our work so we had to ask for police assistance.”

Residents retrieve electric wires and other recyclable materials after a fire razed a squatter colony in Manila, Philippines May 9, 2017. PHOTO: REUTERS

The looting happened even as firefighters tried but failed to rescue a 16-year-old boy who had been trapped inside a house.

Some firemen were seen aiming their powerful water hoses at the looters, but the looting continued undeterred until the police arrived.

Huge fires are an ever-present threat in the slums of Manila, a sprawling metropolis of more than 13 million people.

This is because the homes of the poor are densely packed and are made of light, combustible materials such as plywood and cardboard boxes.