Macron triumphs but focus turns to challenges ahead 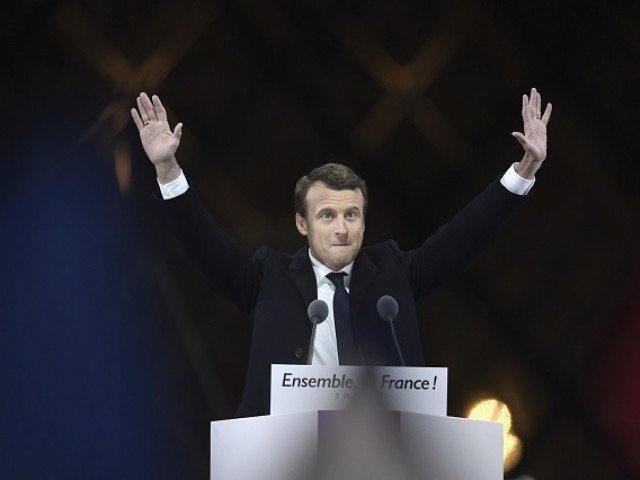 Macron triumphs but focus turns to challenges ahead

Macron triumphs but focus turns to challenges ahead: Emmanuel Macron won a resounding victory in the French presidential election but the focus shifted immediately on Monday to whether he can govern the country without the support of a traditional party.

At 39, the pro-EU former investment banker will become France’s youngest-ever president when he is inaugurated next weekend after crushing far-right leader Marine Le Pen in a run-off vote on Sunday.

The European Union breathed a sigh of relief at the election of a supportive French leader and the euro briefly hit a six-month high, but Macron faces a formidable challenge to enact his programme while trying to unite a fractured and demoralised country.

“I know the anger, the anxiety and the doubts that a large number of you have expressed,” Macron told thousands of cheering and flag-waving supporters at a victory party in the courtyard of the Louvre museum in Paris. “I will fight with all my strength against the divisions that are undermining us,” he said.

Final results showed he had won 66.1 per cent of the votes to 33.9 per cent for Le Pen. But many commentators said the fact that a third of the electorate either abstained or cast blank or spoiled votes on Sunday showed Macron would start his mandate under intense scrutiny.

The left-wing paper Liberation said he was “under pressure”, even before his inauguration which is set to take place next Sunday.

“The high abstention rate, despite the threat of the far-right, is a sign already of dissatisfaction with the new president,” it said in an editorial.

Macron, a former economy minister, has proposed an ambitious domestic reform agenda. He wants to ease rigid labour laws he believes fuel high unemployment, cut state spending, improve education in deprived areas and increase welfare protection to the self-employed. But he is inexperienced – the presidential election was the first time he had stood for office – he has no political party and he faces a huge task to fashion a working parliamentary majority after legislative elections next month.

His centrist En Marche [On the Move] movement, barely a year old, has said it will field candidates in every constituency in the two-round election in June. There is skepticism however about Macron’s ability to win a majority with En Marche candidates, meaning he might have to form a coalition.

“In order for us to act, we will need a majority in the National Assembly,” En Marche secretary general Richard Ferrand told TF1 television.

One of Macron’s immediate tasks will be to name his prime minister who will govern between now and the parliamentary elections on June 11 and 18, and perhaps beyond. Macron said before Sunday’s vote he had made his choice but would not reveal the name. He has previously said he would like to appoint a woman.

On Monday, he appeared alongside the man he will succeed as president, President Francois Hollande, at the commemoration of Victory in Europe day on May 8, 1945. Hollande, who launched Macron’s political career by appointing him as an advisor before appointing him to the cabinet, greeted him warmly before they laid a wreath together under the Arc de Triomphe.

Macron also inherits a country still in a state of emergency following a string of militant-inspired attacks since 2015 that have killed more than 230 people and plagued Hollande’s presidency. In an early plea for unity, Macron reached out to Le Pen’s supporters after a vicious election campaign that exposed deep economic and social divisions, as well as tensions provoked by identity and immigration.

“I will do everything I can over the next five years to ensure that people no longer have any reason to vote for extremes,” he said.

Le Pen responded to defeat by vowing she would lead her anti-immigration National Front [FN] strongly into the legislative elections. A key aide said the party would change its name as part of a revamp.

According to polls released on Monday, En Marche will win between 24 and 26 per cent of votes in those elections, with the conservative Republicans party on 22 per cent and the National Front on 21-22 per cent. This could give the National Front a significant increase on the two seats the party currently holds.

The far-left France Insoumise [France Unbowed] party of Jean-Luc Melenchon would score 13-15 per cent and the Socialist Party 8-9 per cent if the two-round parliamentary elections were held now, the surveys suggested. Unknown three years ago, Macron is now poised to become one of Europe’s most powerful leaders.

Western leaders largely hailed the result after the shock of Britain’s vote to leave the EU and the election of Donald Trump in the United States. German Chancellor Angela Merkel’s spokesperson said it was a “victory for a strong and united Europe” and the two had a “very warm” telephone call after his victory was announced, Macron’s team said. Brussels was visibly relieved too at avoiding a Le Pen victory which could have threatened the very existence of the bloc after Britain’s vote to leave.

In a victory party on Sunday evening, Macron walked on to the stage to the strains of “Ode to Joy”, the anthem of the EU. His 64-year-old wife Brigitte joined him on stage with her children and grandchildren, a sign that they will be a highly visible couple when he is in office.

Trump, who had hinted at support for Le Pen during the campaign, tweeted congratulations to Macron on a “big win” and said he looked forward to working with him.