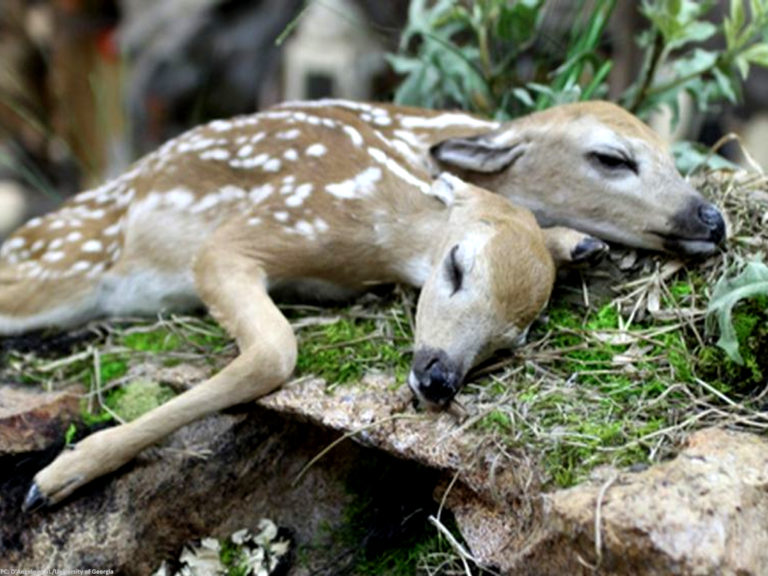 Minnesota Forest Has A Deer With Two Heads

Minnesota Forest Has A Deer With Two Heads: A unique kind of a deer fawn with two-heads has been discovered in a forest in Minnesota.

A rare deceased two-headed female deer fawn was discovered in a forest and is being regarded as very uncommon. As per veterinary experts, the deer is amazing and extremely rare.

“We can’t even estimate the rarity of this. Of the tens of millions of fawns born annually in the US, there are probably abnormalities happening in the wild we don’t even know about,” an expert of the forest animals shared.

The discovery was made back in May 2016 by a mushroom hunter, which was now published in the journal America Midland Naturalist where the rare deformity was explained.

As per Science Alert, the two-headed fawns turned out to be conjoined twins, which are first of their kind to have been brought to term and birthed. Though these fawns were birthed, they were stillborn.

An analysis showed that the fawns had one body, but the spine diverged at the thorax into two, resulting in two separate necks and separate heads. They had two separate gastrointestinal tracts, two hearts and extra spleens. However, they shared one malformed liver and a pair of lungs that never breathed outside air, which verified that the fawns were stillborn. D’Angelo, said that as per their anatomy, the deer would have never made it, anyway.

Their anatomy indicates the fawns would never have been viable. Yet, they were found groomed and in a natural position, suggesting that the doe tried to care for them after delivery.

The discovery was made back in May 2016 by a mushroom hunter, which was now published in the journal America Midland Naturalist where the rare deformity was explained.

Moreover, Daily Mail reported, Wild Images In Motion Taxidermy will put these fawns on display in stuffed form. The University of Minnesota Veterinary Anatomy Museum will have a skeletal display, as per the researchers.