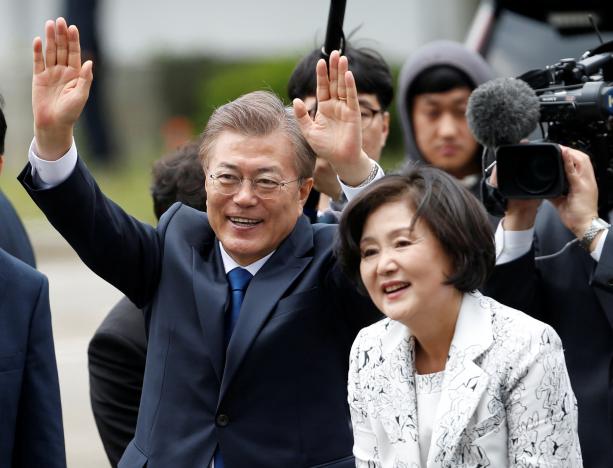 Moon said in his first speech as president he would immediately begin efforts to defuse security tensions on the Korean peninsula and negotiate with Washington and Beijing to ease the row over a U.S. missile defense system being deployed in the South.

In his first key appointments, Moon named two liberal veterans with ties to the “Sunshine Policy” of engagement with North Korea from the 2000s to the posts of prime minister and spy chief.

Moon named Suh Hoon, a career spy agency official and a veteran of inter-Korea ties, as the head of the National Intelligence Service (NIS). Suh was instrumental in setting up two previous summits between the North and South.

Veteran liberal politician Lee Nak-yon was nominated to serve as prime minister. Now a regional governor, Lee was a political ally of the two former presidents who held the summits with the North in 2000 and 2007,

Moon was expected to fill the remaining cabinet and presidential staff appointments swiftly to bring an end to a power vacuum left by the removal of Park Geun-hye in March in a corruption scandal that rocked South Korea’s business and political elite.

“I will urgently try to solve the security crisis,” Moon said in the domed rotunda hall of the parliament building. “If needed, I will fly straight to Washington. I will go to Beijing and Tokyo and, if the conditions are right, to Pyongyang also.”

Spy chief nominee Suh said Moon could go to Pyongyang if it was clear the visit would help resolve the North Korean nuclear crisis and ease military tension on the Korean peninsula.

The deployment of the Terminal High Altitude Area Defense System (THAAD) in the South has angered China, Seoul’s major trading partner, which sees the U.S. system’s powerful radar as a threat to its security.

The issue has clouded efforts to rein in North Korea’s nuclear and missile programs, and also led to recriminations by Beijing against South Korean companies.

Moon, 64, also pledged to sever what he described as the collusive ties between business and government that have plagued many of South Korea’s family-run conglomerates, known as chaebol, and vowed to be an incorruptible leader.

Moon met leaders of opposition parties before his simple swearing-in ceremony at parliament and promised to coordinate better with them on national security issues.

Office workers and passersby lined the streets as Moon’s motorcade passed through central Seoul en route to the presidential Blue House from parliament.

Moon stood and waved to well-wishers through the sunroof of his limousine, which was flanked by police motorbikes and a security detail.

Abe said in a statement he looked forward to working with Moon to improve bilateral relations, describing Seoul as one of Japan’s “most important regional neighbors”.

The decision by the ousted Park’s government to host the controversial THAAD system has already proved a headache for Moon as Seoul tries to walk a fine line between Washington, its closest security ally, and China.

Moon has said the decision had been made hastily and his government should have the final say on whether to deploy it.

As president, Moon must find a way to coax an increasingly belligerent North Korea to ease its nuclear and missile threats. Pyongyang has conducted its fifth nuclear test and a series of missile launches since the start of last year, ratcheting up tension on the peninsula.

Washington wants to increase pressure on Pyongyang through further isolation and sanctions, in contrast to Moon’s advocacy for greater engagement with the reclusive North.

In one of his first acts as president, Moon spoke by telephone with Chairman of the Joint Chiefs of Staff Lee Sun-jin. A separate statement from Moon’s Democratic Party said he was briefed on the status of the North Korean military and South Korea’s military readiness.

Moon’s election could add volatility to relations with Washington, given his questioning of the THAAD deployment, but was not expected to change the alliance significantly, a U.S. official said.

The White House also congratulated Moon, saying it looked forward to working with him to strengthen the longstanding U.S.-South Korea alliance.

Moon must also try to mend a society badly bruised by the corruption scandal that doomed Park’s administration.

His party lacks a majority in a divided parliament. To push through major initiatives, including creating 500,000 jobs annually and reforming the country’s powerful family-run conglomerates, he will need to forge partnerships with some of those he fought on his path to the presidency.

Moon won with 41.1 percent of the votes but that seemingly comfortable margin belied a deep ideological and generational divide in the country of 51 million people.

Data from an exit poll conducted by South Korea’s top three television networks showed that, while Moon won the majority of votes cast by those under the age of 50, conservative rival Hong Joon-pyo found strong support among voters in their 60s and 70s.