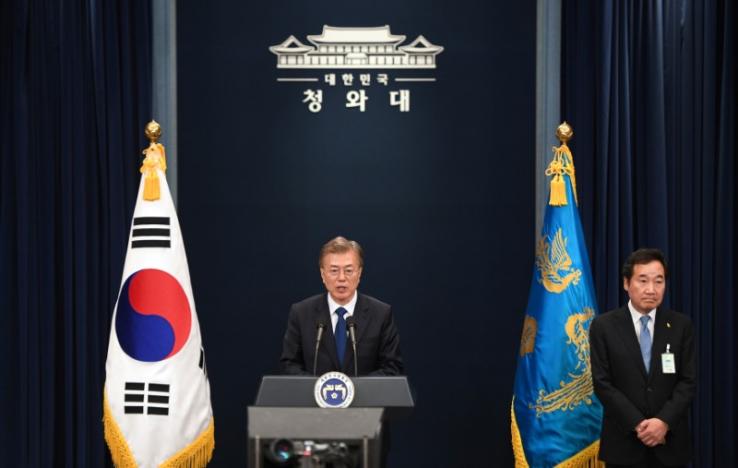 Moon said in his first speech as president he would begin efforts to defuse security tensions on the Korean peninsula and negotiate with Washington and Beijing to ease a row over a U.S. missile defense system being deployed in the South.

In his first key appointments, Moon named two liberal veterans with ties to the “Sunshine Policy” of engagement with North Korea from the 2000s to the posts of prime minister and spy chief.

Moon named Suh Hoon, a career spy agency official and a veteran of inter-Korea ties, as the head of the National Intelligence Service. Suh was instrumental in setting up two previous summits between the North and South.

Veteran liberal politician Lee Nak-yon was nominated to serve as prime minister. Now a regional governor, Lee was a political ally of the two former presidents who held the summits with the North in 2000 and 2007,

Moon was expected to fill the remaining cabinet and presidential staff appointments swiftly to bring an end to a power vacuum left by the removal of Park Geun-hye in March in a corruption scandal that rocked South Korea’s business and political elite.

“I will urgently try to solve the security crisis,” Moon said in the domed rotunda hall of the parliament building. “If needed, I will fly straight to Washington. I will go to Beijing and Tokyo and, if the conditions are right, to Pyongyang also.”

Spy chief nominee Suh said Moon could go to Pyongyang if it was clear the visit would help resolve the North Korean nuclear crisis and ease military tension on the Korean peninsula.

North Korea is likely to welcome Moon’s election but its state media made no mention of his victory on Wednesday.

The deployment of the U.S. Terminal High Altitude Area Defense System (THAAD) in the South has angered China, Seoul’s major trading partner, which sees the system’s powerful radar as a threat to its security.

The issue has clouded efforts to rein in North Korea’s nuclear and missile programs, and also led to recriminations by Beijing against South Korean companies.

Moon, 64, also pledged to sever what he described as the collusive ties between business and government that have plagued many of South Korea’s family-run conglomerates, known as chaebol, and vowed to be incorruptible.

Moon met leaders of opposition parties before his simple swearing-in ceremony at parliament and promised to coordinate with them on national security.

Moon waved to well-wishers through the sunroof of his limousine, which was flanked by police motorbikes.