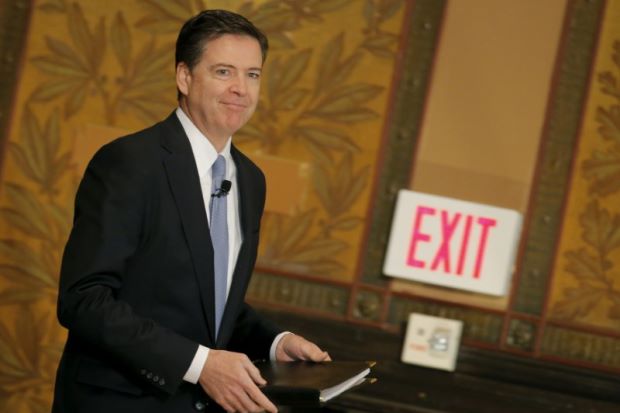 Trump defends firing of FBI director, pledges ‘far better’ replacement: President Donald Trump defended his firing of FBI Director James Comey on Wednesday, fighting a storm of criticism that the ouster was aimed at blunting an agency probe into his presidential campaign’s possible collusion with Russia to sway the 2016 election.

The Republican president’s abrupt move on Tuesday stunned Washington and was swiftly condemned by Democrats and by some in his own party.

“Comey lost the confidence of almost everyone in Washington, Republican and Democrat alike. When things calm down, they will be thanking me,” Trump said in a series of posts on Twitter on Wednesday morning.

The Trump administration said on Tuesday the firing was over Comey’s handling of an election-year FBI probe into then-Democratic presidential nominee Hillary Clinton’s use of a private email server during her time as secretary of state.

Though many Democrats have criticized Comey’s management of the Clinton probe, they said they were troubled by the timing of his dismissal, given that Trump could have acted soon after taking office on Jan. 20 and has repeatedly criticized the FBI and congressional probes into Russian involvement in the election.

Some Democrats compared the move to the “Saturday Night Massacre” of 1973, in which President Richard Nixon fired an independent special prosecutor investigating the Watergate scandal.

Asked if Trump had fired Comey over his handling of the Russia investigation, White House spokeswoman Sarah Huckabee Sanders said no.

Democrats, however, only amplified their calls for an independent investigation into Moscow’s role in the election.

“What we have now is really a looming constitutional crisis that is deadly serious,” Democratic Senator Richard Blumenthal told CNN.

In one Twitter message on Wednesday, Trump said, “The Democrats have said some of the worst things about James Comey, including the fact that he should be fired, but now they play so sad!”

Some Republicans have also said they were troubled by the timing of Comey’s firing, including Senator Richard Burr, the Republican chairman of the Senate Intelligence Committee. That is one of several congressional panels investigating Russian interference during the election and possible collusion by Trump campaign staff.

U.S. intelligence agencies concluded in a January report that Russian President Vladimir Putin had ordered an effort to disrupt the 2016 election that included hacking into Democratic Party emails and leaking them, with the aim of helping Trump.

Russia has repeatedly denied any meddling in the election and the Trump administration denies allegations of collusion with Russia.

The Kremlin said on Wednesday it hoped Comey’s firing would not affect Moscow’s ties with Washington, saying it believed his dismissal had nothing to do with Russia.