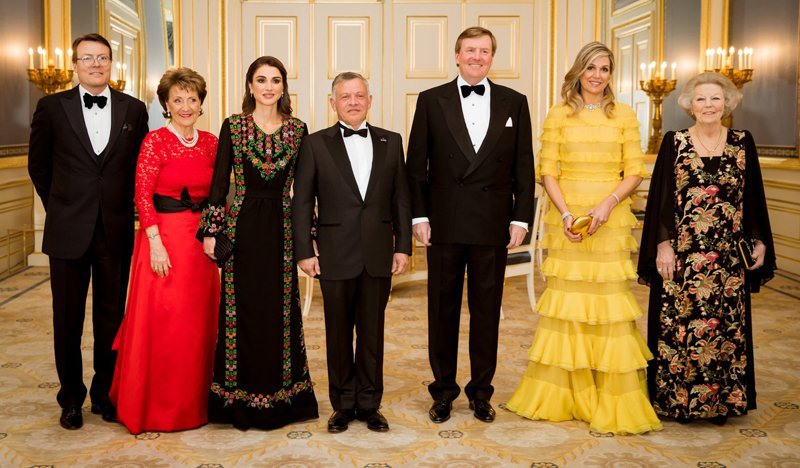 Queens Dressed To Impress: The Jordanian royal is on an official visit to the European nation with King Abdullah II. Queen Rania stunned in Givenchy and has cited the French label as one of her all-time favorites.

The Jordanian nobility is currently in the Netherlands with her husband, King Abdullah II bin Al-Hussein. The couple was greeted by the European nation’s King Willem-Alexander and Queen Maxima.

At the dinner Queen Maxima also dressed to impress in a delicately ruffled gown, which turned heads with its sunny yellow hue.

The trip, which is designed to strengthen ties between Jordan and the Netherlands, will also see King Abdullah hold talks with Dutch Prime Minister Mark Rutte.

The 27th Annual Meeting and Business Forum of the European Bank for Reconstruction and Development (EBRD) will be held under Royal Patronage during May 8-10, will provide an opportunity to discuss global challenges.

Minister of Planning and International Cooperation Imad Fakhoury said that the forum will take place in the King Hussein bin Talal Convention Centre on the Dead Sea shores, adding that His Majesty King Abdullah II will attend the opening session of the EBRD’s Board of Governors and will deliver a keynote address.

Her Majesty Queen Rania Al Abdullah will also deliver a speech in a major session on the future of work on May 9.

The annual meeting and business forum of the EBRD, hosted by Jordan from 8 to 10 May, with the participation of about 2,500 people representing governments, businessmen and academics, represents a valuable opportunity to promote the Kingdom as an attractive business center in the region.

The activities of the annual meeting will include parallel events such as the Business Forum, including a specialized session on investment prospects in Jordan, a session for civil society and an annual donor meeting.