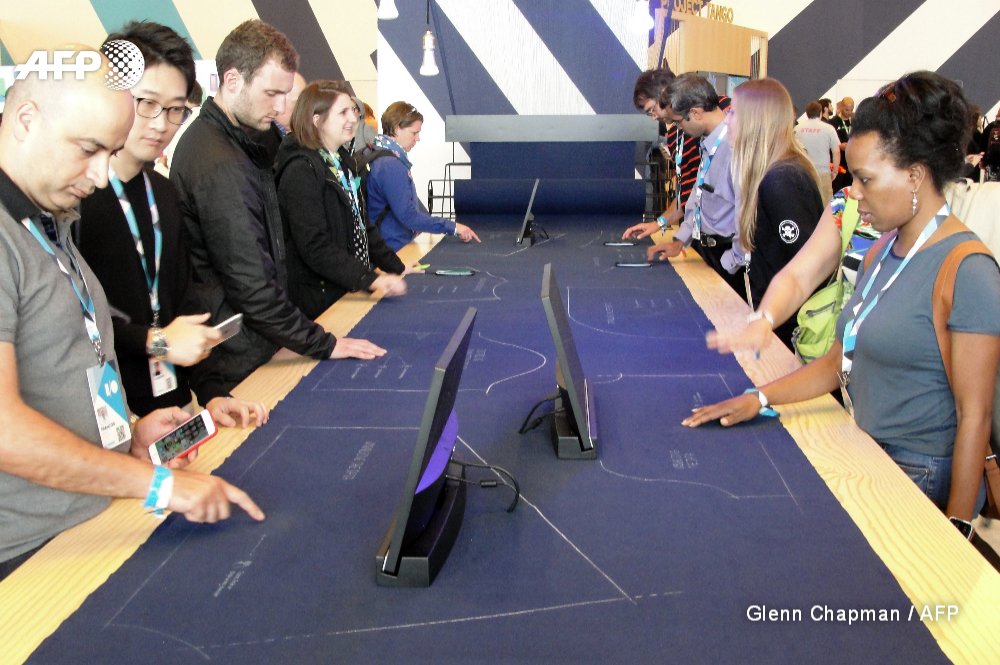 ‘Smart’ denim promises touchscreen tech clothes: A young man in a white t-shirt pulls on a dark blue denim trucker jacket, tucks his smartphone in an inside pocket and puts in-ear headphones in his right ear.

He mounts a fixed-gear bike with flat, slightly curved wide handlebars. Riding through the streets of San Francisco, he occasionally taps or swipes his right hand over the left cuff of his jacket, as the directions he’s listening to continually pop up on the screen of this advertisement.

It’s an ad from iconic US jeans maker Levi Strauss for Project Jacquard, an initiative with Google that the companies started two years ago for so-called “smart” denim.

The future of the popular fabric was the focus at a recent international fashion fair in Paris — after all most believe the word denim derives from the French “serge de Nimes”, a serge from the city of Nimes.

The fair featured many wearable innovations such as a waterproof jacket with sunscreen bands and a cable in the pocket to recharge a cellphone, or jeans that keep your body temperature stable.

Once mainly the purview of athletic gear — with moisture-wicking shirts and trousers and then clothing that can track motion, heart rate, and body temperature — the new trend for fashion designers is to take everyday wear and transform it using new technologies.

This is clothing made from specially woven fabric with touch-screen control capabilities that can be designed in such a way to visually stand out or go unnoticed depending on designers’ wishes.

French-based fashion company Spinal Design, for example, has created jeans that can give wearers with directions without having to whip out the mobile at every single intersection.

Through blue tooth sensors stitched into the jeans’ waistband, the smart phone stays out of sight.

In 2015, the company from the eastern French town of Mulhouse designed a bikini that tells women when it’s time to apply more sun screen.

The two-piece retails for 149 euros ($163) and comes with a small detachable ultraviolet sensor that, through a smart phone or tablet, sends a “sun screen alert” when the sunbather’s skin needs more protective cream.

The detector is calibrated to the wearer’s skin type and how much of a tan she wants to get, and is “virtually devoid of any radiation,” Spinal said.

The Spinal jeans, made in France, cost 150 euros and also have email notification capabilities.

“They will vibrate differently depending on whether the message received is from your family, your friends or work, in a way that you won’t have to constantly check your email on weekends or on vacation,” Spinal said.

On their end, Google and Levi expect to release their denim jacket sometime this year, but it will come with a hefty $350 price tag due in part to its special interactive fabric that allows the jacket’s wearer to order various products online.

Other international etch and fashion companies have also jumped on the “smart” denim bandwagon.

American designer Cone Denim for its part has blended its denims with technical textile fibres from equipment used on motorcycles — this to better tout the sturdiness of its clothes.

But these companies recognise that there has to be more to “smart” jeans than just fashion sense and connected capabilities and that means making sure they are environmentally friendly.

“The consumer demands greater traceability and ecology, especially when it comes to denim because it is a product that is a bit controversial,” said Marion Foret, fashion products chief for Premiere Vision Paris, which organises trade shows for the textile and clothing sector, including the denim show.

Denim is a product “that doesn’t always carry the best reputation, so textile makers are forced to use more ecological processes,” Foret added, such as making denims with organic or traceable cotton, cleaning denims without water, and using dyes that won’t pollute the land.

Others seek to keep consumers better informed like Pakistani manufacturer Artistic Fabric Mills which developed an application to retrace the history of the jeans.

But for some young fashion students the future of jeans is not all about technology.

“Connecting jeans to a smartphone is not necessarily what we want to have,” said Aurelia Martin, who studies fashion in Brussels.

“There are problems that are a little more essential in terms of production, the dye, the cotton, the (jeans’) pretty weak longevity, and the quality.”