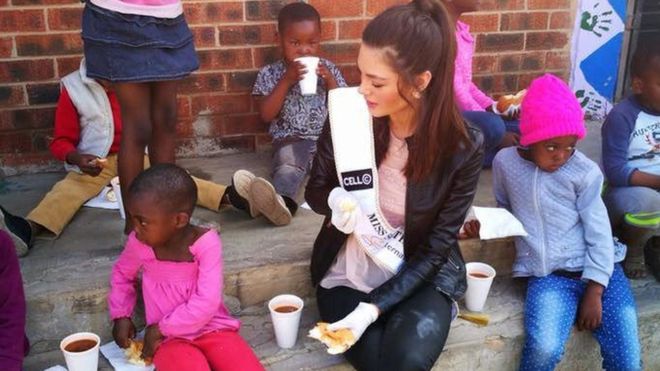 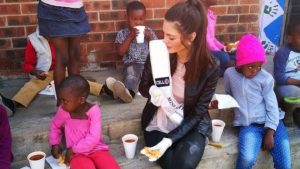 Photos of Miss South Africa wearing gloves while visiting black children at an orphanage in Soweto sparked a online outcry – but the orphanage staff say any insinuation that Demi-Leigh Nel-Peters is racist is “ridiculous”.

“Of course it wasn’t because she didn’t want to touch black children,” says Carol Dyantyi, a spokesperson for the Orlando West Community Centre Ikageng.

Nel-Peters was volunteering to feed orphans at the centre, and the gloves were a health and safety measure.

“We told her, and all other volunteers, to wear them while they were handling food around the children,” Dyantyi tells BBC Trending. “It was purely to protect the children from the risk of contaminated food. This social media reaction is ridiculous.”

Thousands of Twitter users criticisedNel-Peters after photos of her at a soup drive on Wednesday began to circulate on social media.

Many accused the beauty queen of wearing the latex gloves “because she didn’t want to touch black children” and shared images of her hugging dogs and white children with bare hands. 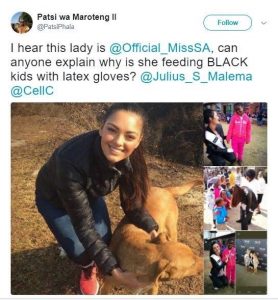 In a video posted to her Twitter account, Nel-Peters said that she wore the gloves for sanitary reasons and denied that were any racial undertones to her actions.

“All the volunteers on site wore gloves today because we honestly thought that it’s the right thing to do while working with food and while handing out food to young kids,” Nel-Peters said. She also apologised to those who were offended.

Claudia Henkel, a spokesperson for the beauty queen, also sent images to BBC Trending of Nel-Peters gloveless and playing with the children after the food had been served. 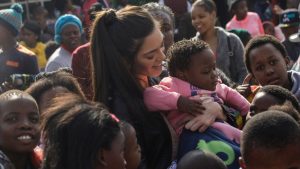 However, not everyone was satisfied with her response. The hashtag #MissSAChallenge began to trend on Twitter on Thursday, as South Africans poked fun of the “hygiene” reason cited for the gloves.

More than 18,000 tweets used the hashtag, and some users posted pictures of themselves doing mundane tasks whilst unnecessarily wearing gloves.