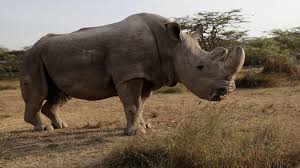 The Tragedy in the animal world happened this Monday when the world’s last male northern white rhino passes away. The 45 years old rhino, named Sudan, due to the rapid deterioration in his condition was euthanized by Wild life conservancy department.

The Only White Rhino, Sudan was under age related issues treatment to recover his muscles and bones and also gave him extensive skin wounds. He was in discomfort from a deep wound on his right hind leg. Due to this injury he was unable to stand up and his condition seem no improvement in the last few days.

Sudan was transported to Ol Pejeta Conservancy Nairobi where he lived with two females of the same species. Conservationists last year put Sudan on app Tinder, hoping to raise enough money to pay for a $9 million treatment. However they had collected Sudan’s genetic material on Monday that could be used in future to attempt reproduction of northern white rhinos.

There are thousands of southern white rhinos still roaming the plains of sub-Saharan Africa, but this number drastically dropped in Northern whites due to their theft. After that they sell northern white rhino horns for $50,000 per kilo which is a huge benefit for them as it is considered more valuable than gold.

In 2001 it was estimated that there were 777 white rhinos worldwide. Before Sudan demise yesterday second last male white rhino named Angalifu died of old age at the San Diego Zoo.