Tillerson gives nod to acting on climate at Arctic meet 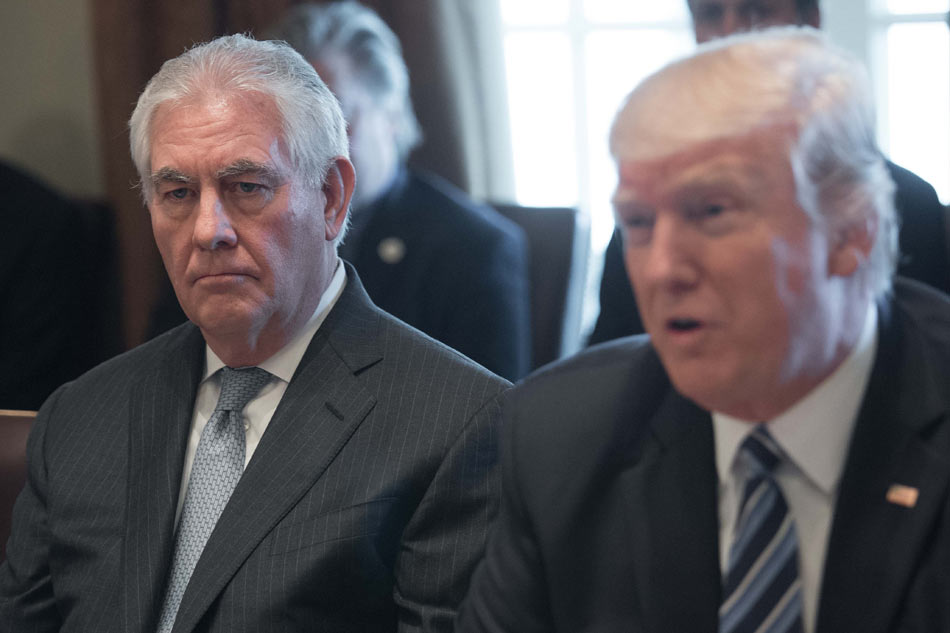 Tillerson gives nod to acting on climate at Arctic meet

Tillerson gives nod to acting on climate at Arctic meet: US Secretary of State Rex Tillerson signed an agreement recognising the landmark Paris climate accord at a meeting of Arctic nations in Alaska on Thursday, but said President Donald Trump was not rushing to decide whether to leave or weaken US commitments to the pact.

Trump’s efforts to dilute US climate policies have made the country an outlier on the issue and put Tillerson in an awkward position at a meeting of the Arctic Council. The council meets every two years to tackle climate change and other problems facing the North.

The Arctic is warming at a faster pace than any other part of the world, forcing native villagers on coasts and rivers in the region to move to higher ground as permafrost and glaciers melt and seas rise. Global warming also puts stress on wildlife such as walruses and polar bears as they lose their habitat areas.

The Arctic agreement Tillerson signed with foreign ministers from the other seven nations of the council, including Russia, Canada and Norway, made only a passing reference to the Paris pact. It noted “entry into force” of the pact and its implementation and called for global action to reduce greenhouse gas pollution.

Still, Tillerson’s signing of the document surprised a source close to the State Department. “We’d heard  that there would likely be a significant US effort to redline or even remove entirely the Paris and climate language,” said the source, who spoke on condition of anonymity due to the sensitive nature of the talks.

Tillerson came around to the agreement after hours of debate following a dinner the council members ate together on Wednesday night, Denmark’s Foreign Minister Anders Samuelsen told Reuters. The ministers stressed to Tillerson the business benefits, as well as the advantages to the environment and Arctic natives, of taking action on climate, Samuelsen said. Tillerson, a former chief executive of Exxon Mobil is one of Trump’s advisers who supports staying in the agreement. “He was happy about it; he seemed to be satisfied. We all were because it’s a big step,” Samuelsen said.

A local tribal leader also pressured Tillerson to act at a celebration of the council on Wednesday. “We the tribes ask you to listen to our land. It’s telling us to implement promises to slow the change,” Chairman Victor Joseph of the Tanana Chief Conference said before Tillerson was introduced at the celebration.

It was unclear how much influence the Arctic agreement, signed late on Wednesday and made public on Thursday, would influence Trump’s decision. Tillerson told the council the Trump administration was reviewing how it will approach climate change but was not going to rush to make a decision on Paris. “We are appreciative that each of you has an important point of view,” said Tillerson. “We are going to make the right decision for the United States,” said Tillerson. Trump is expected to make a decision on Paris after a Group of Seven summit at the end of May.

Finland’s Foreign Minister Timo Soini, whose country will chair the council for the next two years, praised US leadership in the Arctic Council, but added that the Paris pact is an important tool in fighting climate change.

Adding pressure on Trump, scientists from the United States and other Arctic nations issued a report ahead of the meeting warning that the warming could lead to trillions of dollars worth of damage to buildings, roads and other infrastructure this century. The council also signed an agreement on sharing science and data on the Arctic, an effort led by Russia and the United States, and addressed Arctic search and rescue and communications.

Trump’s administration has already reversed Obama-era bans on offshore drilling in certain parts of the Arctic, a turn that could intensify competition for resources in the region with major oil producer Russia. Russia has beefed up its military presence in the Arctic to levels not seen since the fall of the Soviet Union, as global interest in the region’s oil, gas and rare earth metals heats up.